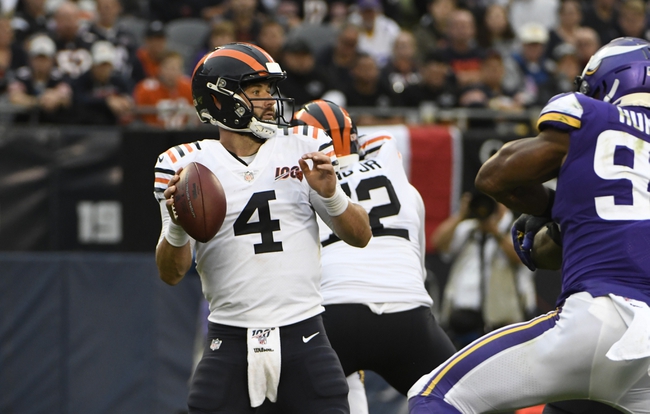 The Chicago Bears and the Oakland Raiders meet in a week 5 NFL matchup from Tottenham Hotspur Stadium in London on Sunday afternoon.

The Chicago Bears will look to build on their current 3-game winning streak after a 16-6 win over Minnesota in their last outing. Mitch Trubisky has thrown for 588 yards, 3 touchdowns and 2 interceptions on 65.1% passing but there’s word that Trubisky will miss this game due to injury, leaving the QB duties to Chase Daniel who has thrown for 195 yards and a touchdown on 73.3% passing. David Montgomery leads the Bears in rushing with 200 rushing yards and a touchdown while Allen Robinson II has 280 receiving yards and a team-high 24 receptions to lead Chicago’s receiving corps. Taylor Gabriel has 110 receiving yards and 3 TDs for the Bears this year. Defensively, Danny Trevathan leads the Bears with 33 total tackles including a team-high 24 solo tackles while Khalil Mark has a team-high 4.5 sacks and Nick Williams is right behing with 4 sacks this season. As a team, Chicago is averaging 273.5 yards of total offense and 16.5 points per game while allowing 290.8 yards of total defense and 11.2 points per game against this season.

The Oakland Raiders will look to get back above .500 after a 31-24 win over Indianapolis last time out pushed their record to 2-2 this season. Derek Carr has thrown for 888 yards, 6 touchdowns and 3 interceptions on 72.1% passing while Josh Jacobs leads the Raiders in rushing with 307 rushing yards and 2 touchdowns. Darren Waller leads Oakland with 33 catches on 37 targets for 320 yards while Tyrell Williams has 216 receiving yards and 4 receiving touchdowns this year. Defensively, Tahir Whitehead leads the Raiders with 24 total tackles including a team-high 19 solo tackles while Benson Mayowa has a team-high 3.5 sacks this season. As a team, Oakland is averaging 335.8 yards of total offense and 19.8 points per game while allowing 390.2 yards of total defense and 25.5 points per game against this season.

I wanted to give a look to Chicago here but as up and down as Mitch Trubisky is, it’s hard for me to get a gauge on Chase Daniel as a starter. On the other hand, I don’t know how much I trust Oakland as a team as the Raiders simply benefitted from the Colts shooting themselves in the foot last week. Instead, I’m going to side with the under. Neither of these teams possess high scoring offenses this season and the biggest X-factor is travelling to England for this game as the jet lag sometimes has an effect on teams going across the pond. I’ll side with the under in what I see being a low scoring affair here.