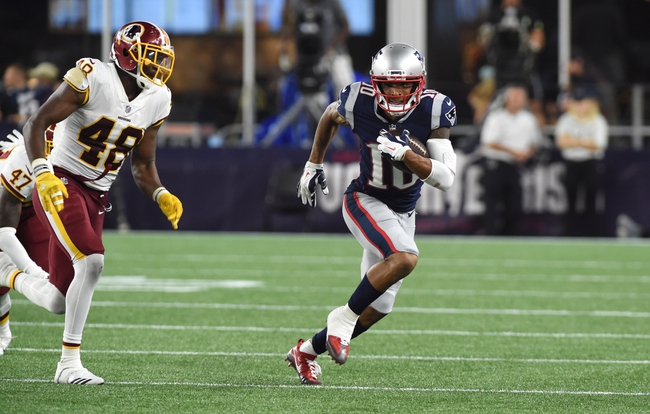 The New England Patriots and the Washington Redskins meet in a week 5 inter-conference matchup in NFL action from FedEx Field on Sunday afternoon.

The New England Patriots will look to remain undefeated on the year after improving to 4-0 with a 16-10 win over Buffalo in their last outing. Tom Brady has thrown for 1,061 yards, 7 touchdowns and an interception on 62.1% passing while Sony Michel leads New England in rushing with 171 rushing yards and 2 touchdowns and Rex Burkhead has 112 rushing yards and a touchdown of his own this season. Julian Edelman leads New England in receiving with 21 catches for 226 yards while Josh Gordon is right behind with 221 yards and Phillip Dorsett II has 197 receiving yards and 3 TDs. James White and the aforementioned Burkhead each have 100+ receiving yards out of the backfield for New England this season. Defensively, Jamie Collins Sr. leads the Patriots with 23 total tackles including a team-high 17 solo tackles as well as 3.5 sacks this season. Kyle Van Noy and Adam Butler each have 2.5 sacks while Devin McCourty has 4 interceptions this year. As a team, New England is averaging 362.2 yards of total offense and 30.5 points per game while leading the NFL in total defense and scoring defense, giving up just 243 yards of total offense and 6.8 points per game this season.

The Washington Redskins on the other hand will be on the hunt for their first win of the year, falling to 0-4 with a 24-3 loss to the Giants last time out. Case Keenum has thrown for 970 yards, 7 touchdowns and 4 picks on 68.1% passing while Adrian Peterson is Washingotn’s top rusher with 90 rushing yards this season. Terry McLaurin leads Washington with 257 receiving yards and 3 touchdowns while Chris Thompson has a team-high 20 receptions for 251 yards. Paul Richardson Jr. has 149 receiving yards with a pair of touchdowns while Vernon Davis and Trey Quinn each have 100+ receiving yards this season. Defensively, Landon Collins leads Washington with 36 total tackles including 22 solo tackles while Quinton Dunbar has a pair of interceptions this season. As a team, Washington is averaging 296.2 yards of total offense and 16.5 points per game while allowing 399.2 yards of total defense and 29.5 points per game against this season.

This is a lot of points to give up to a road team, but it’s weird, at the same time, it doesn’t feel like enough to me. Washington’s offense has gotten progressively worse over the course of the first month of the season, and I was willing to give Washington a pass against Chicago because the Bears are tough defensively, and Washington hung around in the first two games of the season. However, 3 points against the Giants is just embarrassing, and going against a New England team that’s been the best in the NFL in the first month of the season won’t help matters. The Redskins can’t even figure out who is going to be their quarterback on a game to game basis. I just think New England uses this game as an opportunity to make a statement, so I’ll lay the points with the Patriots in what I see being a rout from start to finish.