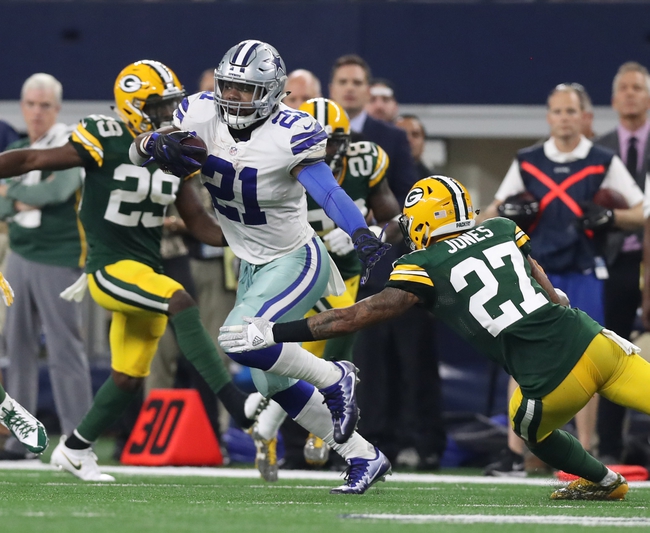 The Green Bay Packers and the Dallas Cowboys meet in a week 5 NFL matchup from AT&T Stadium on Sunday afternoon.

The Green Bay Packers come into this one looking to bounce back from their first loss of the season in a 34-27 defeat to Philadelphia in week 4’s edition of Thursday night football. Aaron Rodgers has thrown for 1,069 yards, 6 touchdowns and an interception on 62.3% passing while Aaron Jones leads Green Bay in rushing with 195 rushing yards and 4 touchdowns this season. Davante Adams leads Green Bay’s receiving group with 25 catches for 378 yards while Marquez Valdes-Scantling has 217 receiving yards. Defensively, Blake Martinez leads Green Bay with 47 total tackles, more than double of what Adrian Amos has with 23 in 2nd. Preston Smith leads Green Bay with 4.5 sacks while Za’Darius Smith has 3 sacks this season. As a team, Green Bay is averaging 337.8 yards of total offense and 21.2 points per game while allowing 330.2 yards of total defense and 17.2 points per game against this season.

The Dallas Cowboys will also be looking to rebound from their first defeat of the season, falling to New Orleans by a final score of 12-10 last time out. Dak Prescott has thrown for 1,143 yards, 9 touchdowns and 3 interceptions on 72.4% passing while Ezekiel Elliott leads Dallas in rushing with 324 rushing yards and 3 touchdowns. Amari Cooper leads the Cowboys with 21 catches for 286 receiving yards and 4 touchdowns while Michael Gallup has 226 receiving yards. Randall Cobb, Jason Witten, Devin Smith and Blake Jarwin each have 100+ receiving yards this season for Dallas as well. Defensively, Jaylon Smith leads Dallas with 36 total tackles including a team-high 27 solo tackles while Leighton Vander Esch is right behind with 32 total tackles this season. Robert Quinn leads Dallas with 3 sacks while DeMarcus Lawrence is right behind with 2.5 sacks and Maliek Collins has a pair of sacks this season. As a team, Dallas is averaging 425.2 yards of total offense and 26.8 points per game while allowing 318.5 yards of total defense and 14 points per game against this season.

You could probably make a case for either side, as Green Bay probably should’ve beaten the Eagles at home. On the other side of the coin, one side could say Dallas had their loss coming after having a cake walk through their first three games of the year while the other side could say they held a pretty good Saints team to 12 points and didn’t give up a touchdown. The difference for me here is that Green Bay has had an extra few days to rest up and prepare for this game. Also, between the two, Aaron Rodgers isn’t the kind of QB I want to be giving up points against, so I’ll take a shot with Green Bay and the points in this one.