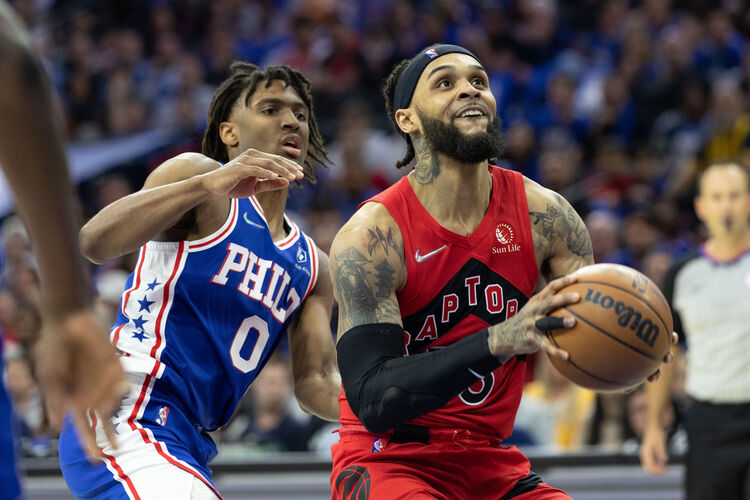 The Toronto Raptors and the Philadelphia 76ers duke it out in a pivotal Game 2 at the Wells Fargo Center on Monday night.

The Toronto Raptors will be hoping to square up the series after getting roughed up by the 76ers in a 131-111 road win in Game 1. Pascal Siakam led the team with 24 points and seven assists on nine of 18 shooting, OG Anunoby added 20 points on nine of 15 shooting, Fred VanVleet scored 18 points while Scottie Barnes tallied 15 points with 10 rebounds and eight assists. As a team, the Raptors shot 48 percent from the field and 12 of 30 from the 3-point line but the problem was their defense as they leaked 35 points in the first quarter and they were always fighting an uphill battle after falling into an early 24-point deficit. Gary Trent Jr. had a rough night as he scored just nine points on two of 11 shooting and the Raptors got next to nothing from their reserves as no bench player finished in double figures in scoring.

Meanwhile, the Philadelphia 76ers will be growing in confidence after making light work of the Raptors in a dominant win on Saturday. Tyrese Maxey drained five 3-pointers to lead the team with 38 points on 14 of 21 shooting, Tobias Harris added 26 points with six rebounds and six assists, James Harden tallied 22 points with 14 assists while Joel Embiid chipped in with 19 points, 15 rebounds and four assists. As a team, the 76ers shot 51 percent from the field and 16 of 32 from the 3-point line as they jumped all over the Raptors early on and exploded for 69 points in the first half to build a big lead early thanks to the hot shooting from Maxey, before they cruised in the second half unchallenged despite Embiid and Harden combining to shoot just 11 of 32 from the field.

The Raptors did a nice job of limiting the 76ers’ Embiid and Harden in Game 1, but they just didn’t expect Maxey to play as well as he did. The 76ers would’ve taken so much confidence from their easy win in Game 1 as they were able to get it done without big numbers from either of their superstars. I expect the Raptors to come out firing after such a disappointing performance, especially players like VanVleet and Trent Jr, but I’m still going with the 76ers to hold onto home-court advantage with another win and cover in this spot.