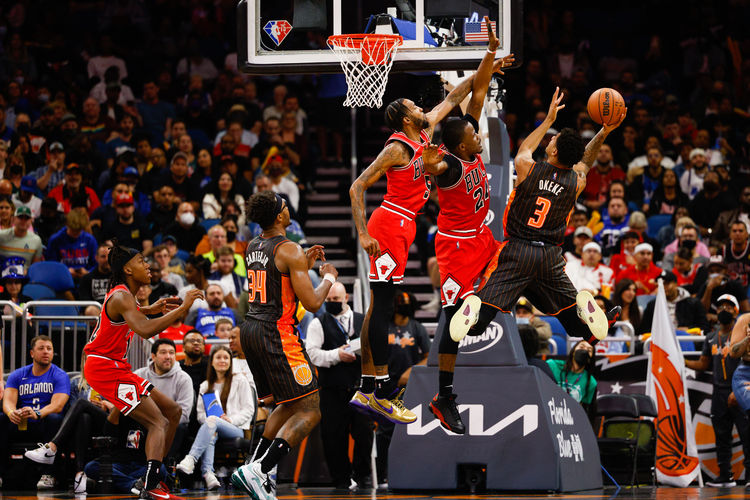 The Orlando Magic and the Chicago Bulls duke it out at the United Center on Monday night.

The Orlando Magic have been in a real slump as they’ve lost 12 of their past 14 games overall and they will be hoping to put an end to a five-game slide after falling short to the Celtics in a 116-111 overtime road loss last night. Terrence Ross led the team with 33 points on 11 of 19 shooting off the bench, Gary Harris added 23 points on nine of 16 shooting while Wendell Carter Jr. tallied 15 points with 16 rebounds and seven assists. As a team, the Magic shot 42 percent from the field and nine of 27 from the 3-point line as they fought their way back from a 14-point deficit to lead by as many as 14 points themselves, but they couldn’t hold off the Celtics and eventually faded away in overtime.

Meanwhile, the Chicago Bulls have been on a tear lately as they’ve won 11 of their past 13 games overall and they will be aiming for an eighth straight victory after outlasting the Wizards in a 120-119 road win on Saturday. Zach LaVine drained seven 3-pointers to lead the team with 35 points on 11 of 22 shooting, DeMar DeRozan added 28 points with nine rebounds and five assists, Nikola Vucevic scored 22 points with 12 rebounds while Coby White chipped in with 20 points and five assists. As a team, the Bulls shot 48 percent from the field and 17 of 34 from the 3-point line as they struggled to get going and trailed at halftime, before exploding for 68 points in the second half to escape with the narrow win thanks to DeRozan who drained the game-winner at the buzzer to steal the game from the Wizards.

The Magic have been dealing with a long list of injuries lately and they will again be without Cole Anthony and Jalen Suggs, while the Bulls are missing a few players including Alex Caruso and Javonte Green. The Magic haven’t been able to build any momentum this season, but even during their slump they were able to push the Celtics to overtime last night, but that leaves me wondering how much left they have in the tank to battle the Bulls who have been one of the hottest teams in the league lately. The line is a little hefty, but I think the Bulls cover it with ease in this spot.