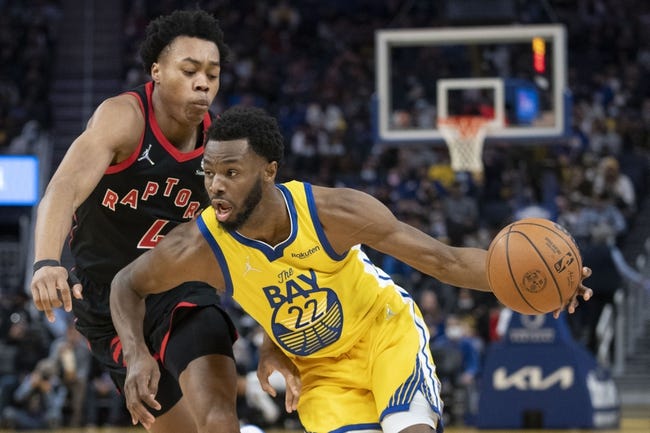 The Golden State Warriors and the Toronto Raptors duke it out at the Scotiabank Arena on Saturday night.

The Golden State Warriors have been in fine form as they’ve won five of their past six games and they will be aiming for a fourth straight victory after last night’s 111-107 road win over the Celtics. Stephen Curry led the team with 30 points, five rebounds and four assists, Andrew Wiggins added 27 points on 11 of 20 shooting while Andre Igoudala chipped in with 12 points and six assists off the bench, but no other player scored more than eight points. As a team, the Warriors shot 43 percent from the field and 16 of 46 from the 3-point line as they squandered a 20-point lead they built in the first half, before rallying in the fourth quarter with a final 10-2 run to pull away late.

Meanwhile, the Toronto Raptors had their latest game against the Bulls postponed due to league health and safety protocols, but they will be eager to build some momentum in this one after falling painfully short to the Nets in an overtime loss on Tuesday. Fred VanVleet led the team with 31 points and nine assists, Pascal Siakam and Gary Trent Jr. each scored 25 points while Scottie Barnes chipped in with 23 points, 12 rebounds and five assists. As a team, the Raptors shot 45 percent from the field and 18 of 52 from the 3-point line as they exploded for 44 points in the third quarter to turn a 13-point deficit into an 11-point lead, but they couldn’t keep up the pace and eventually got edged out in overtime as the Nets escaped on free throws.

Head to head, the over is 6-2 in the last eight meetings overall.

Jordan Poole remains out for the Warriors due to league health and safety protocols so the Warriors remain shorthanded for this one and the same can be said about the Raptors who are awaiting the return of OG Anunoby and Precious Achiuwa. The Warriors are the clear favorites in this matchup, but they’re playing this one on zero days’ rest, while the Raptors will be well-rested as they haven’t played since Tuesday. It’s always tough to bet against the Warriors, but the Raptors have been playing well and I think they get the job done at home in this spot.