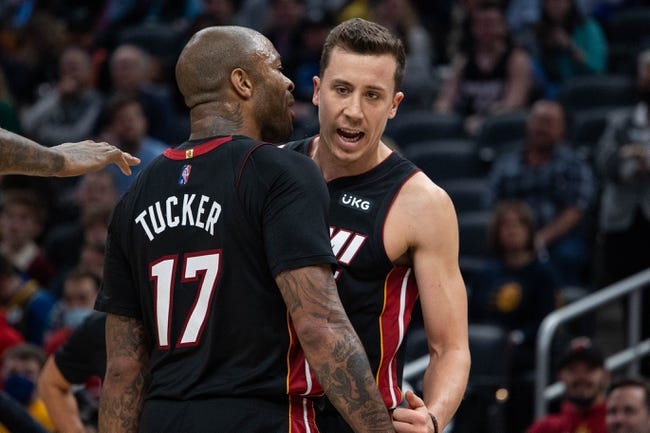 The Miami Heat travel to the Amway Center to do battle with the Orlando Magic on Friday night.

The Miami Heat have been in decent shape lately as they’ve won three of their past four games and they will be looking to stay hot after outlasting the 76ers in a 101-96 road win on Wednesday. Gabe Vincent drained seven 3-pointers to lead the team with 26 points on eight of 16 shooting, Duncan Robinson added 21 points with eight rebounds and three assists while Kyle Lowry chipped in with 14 points and five assists. As a team, the Heat shot 44 percent from the field and 18 of 44 from the 3-point line as they held the 76ers to just 18 points in the first quarter to jump out to an early double-digit lead, which grew to as many as 23 points before the 76ers rallied in the fourth quarter to make it interesting late. The Heat got just 18 points from their bench, but all five of their starters finished in double figures in scoring.

Meanwhile, the Orlando Magic have been in terrible form as they’ve lost 13 of their past 14 games and they will be hoping to put an end to a six-game slide after getting routed by the Hawks in a 111-99 home loss on Wednesday. Moritz Wagner led the team in scoring with 19 points on six of nine shooting, Terrence Ross added 18 points with seven rebounds and eight assists while RJ Hampton chipped in with 15 points and four assists. As a team, the Magic shot just 38 percent from the field and 10 of 35 from the 3-point line as they allowed 37 points in the second quarter to trail by 14 points at halftime, before getting blown out in the third quarter where the deficit ballooned out to 23 points. Chuma Okeke scored just eight points on two of 10 shooting while Cole Anthony had a night to forget as he scored just seven points on three of 14 shooting.

Head to head, the Heat are 1-4 ATS in the last five meetings overall.

Jimmy Butler remains out, while Tyler Herro is currently listed as questionable, while the Magic are sweating on the availability of Cole Anthony, Mo Bamba and Gary Harris who are all listed as questionable for this one. The Heat have plagued by injuries which has really stalled their momentum this season, but they’ve won three of their past four and they looked great in their road win over the 76ers on Wednesday. You can’t say the same about the Magic who have won just one of their past 14 games and I don’t see them having much of a chance in this one if Anthony, Bamba and Harris al sit out in this one. Tough to pick this one, but I’m sticking with the more consistent Heat to get the job done at the short line.