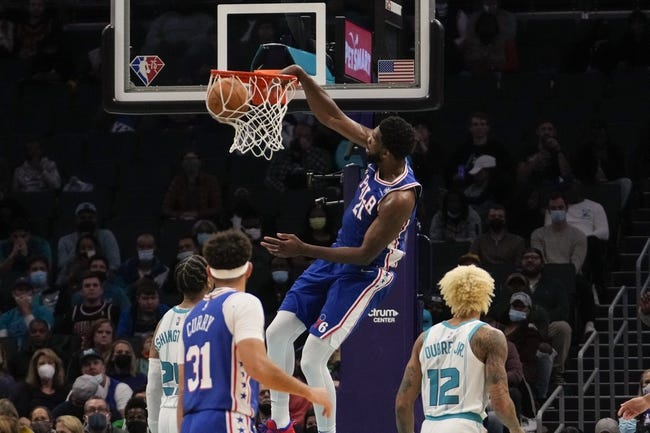 The Charlotte Hornets play host to the Philadelphia 76ers at the Spectrum Center on Wednesday night.

The Philadelphia 76ers are starting to heat up now as they’ve won three of their past four games and they will be gunning for a third straight victory after outlasting the Hornets in a 127-124 overtime road win on Monday. Joel Embiid led the team with 43 points, 15 rebounds and seven assists on 15 of 20 shooting, Tobias Harris added 21 points, 11 rebounds and four assists while Shake Milton chipped in with 16 points. As a team, the 76ers shot 52 percent from the field and 15 of 36 from the 3-point line as they exploded for 44 points in the second quarter to overcome an early 12-point deficit, before pulling away in overtime behind their defense as they held the Hornets scoreless for the final 2:41.

Meanwhile, the Charlotte Hornets have been in a rut as they’ve lost four of their past five games and they will be hoping to bounce back after falling painfully short to the 76ers in a 127-124 overtime home loss on Monday. Kelly Oubre Jr. led the team with 35 points on 13 of 24 shooting, Miles Bridges and PJ Washington each scored 16 points while Cody Martin chipped in with 14 points, six rebounds and four assists. As a team, the Hornets shot 44 percent from the field and 16 of 46 from the 3-point line as they rallied back from a 13-point deficit to extend the game, only to come up short in overtime where they scored just five points. The Hornets had seven players finish in double figures in scoring, but they just had no way of stopping the 76ers’ Joel Embiid who barely missed all night.

The 76ers are starting to heat up again and they will take plenty of confidence from their overtime win on Monday. The Hornets will be out for revenge after falling just short to the 76ers, but they will once again be severely shorthanded as LaMelo Ball, Terry Rozier, Ish Smith and Mason Plumlee are all listed as out. It’s hard to back the Hornets while they’re missing so many players, but they were more than competitive in the last meeting and I think they’ll be good enough to keep it close once again.