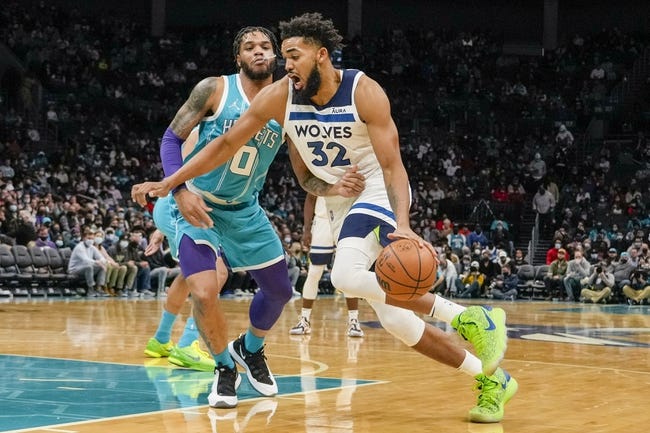 The Minnesota Timberwolves invade the Capital One Arena to battle the Washington Wizards on Wednesday night.

The Minnesota Timberwolves have been in great shape as they’ve won seven of their past eight games and they will be hoping to build on their current two-game win streak after sneaking past the Pacers in a 100-98 home win on Monday. Karl-Anthony Towns led the team with 32 points on 13 of 22 shooting, Anthony Edwards and D’Angelo Russell each scored 21 points while Naz Reid chipped in with 13 points off the bench. As a team, the Timberwolves shot 43 percent from the field and nine of 35 from the 3-point line as they struggled for most of the game and trailed by as many as 12 points in the third quarter before going on a 22-9 run to get back in front and escape with the narrow win after Towns fouled out with 1:34 remaining.

Meanwhile, the Washington Wizards have been in a real funk as they’ve lost five of their past eight games and they will be hoping to bounce back after falling to the Spurs in a 116-99 road loss on Monday. Bradley Beal led the team with 18 points and eight assists, Kentavious Caldwell-Pope added 17 points while Spencer Dinwiddie chipped in with 16 points. As a team, the Wizards shot 44 percent from the field and nine of 31 from the 3-point line as they got off to a quick start and led by 10 points in the first half, but it was a game of two halves and the second half belonged to the Spurs who exploded for 71 points to win comfortably in the end. All five starters finished in double figures in scoring, but no bench player scored more than six points.

The Timberwolves have quietly been one of the hottest teams in the league as they’ve reeled off seven wins in their last eight games and they will take plenty of confidence from their hard-fought win over the Pacers on Monday. The Wizards started the season in great form, but they’ve really cooled off lately and they didn’t look too good in their blowout loss to the slumping Spurs in their last outing. The Wizards will turn things around sooner rather than later, but based on recent form, the Timberwolves represent decent value as underdogs in this spot.