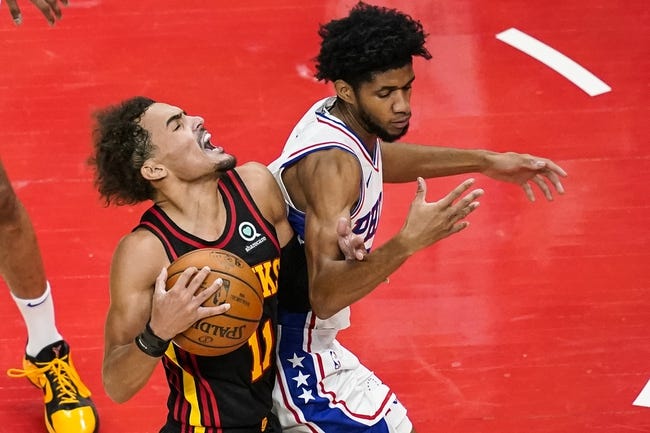 The Atlanta Hawks and the Philadelphia 76ers meet in game five of their best of seven Eastern Conference semi-final series in NBA action from the Wells Fargo Center on Wednesday night.

The Atlanta Hawks will look to take a 3-2 series lead back home after evening up the set at two wins apiece following a 103-100 win over the Sixers last time out. Trae Young led the Hawks with 25 points along with a whopping 18 assists for the double-double while Bogdan Bogdanovic had 22 points with 4 threes. John Collins and Clint Capela each had a double-double with Collins logging 14 points with 12 boards and Capela going 6 of 9 from the field for 12 points with a team-high 13 rebounds. Kevin Huerter chipped in 10 points to finish off the scoring in double figures for the Hawks in the win. Young leads the Hawks in scoring and assists in the playoffs with 28.3 PPG and 10.7 APG while Bogdanovic is averaging 16.4 PPG and Collins has 14.4 PPG with 7 RPG. Danilo Gallinari, Kevin Huerter and Clint Capela all have double-digit scoring averages in the playoffs with Capela logging a team-high 12.7 RPG as well in the postseason. As a team, Atlanta is averaging 109.4 PPG on 44.4% shooting from the field, 33.3% from three and 83.9% from the foul line while allowing 111.6 PPG on 49.4% shooting from the field and 41.4% from three in their last five games.

The Philadelphia 76ers will look to bounce back at home after their loss in game four last time out. Tobias Harris led the Sixers with 20 points on 8 of 19 shooting while Joel Embiid and Seth Cutty each had 17 points with Curry shooting an efficient 7 of 10 from the floor while Embiid went 0 for 12 from the floor in the second half but made up for it by grabbing a game-high 21 rebounds. Ben Simmons added 11 points with 12 rebounds and a team-high 9 assists while Furnan Korkmaz added 10 points to cap off the scoring in double figures for the 76ers in the victory. Embiid leads the Sixers in scoring and rebounding with 27.4 PPG and 9.9 RPG while Tobias Harris has 23.2 PPG and 8.8 RPG. Seth Curry is averaging 16.7 PPG and Ben Simmons is contributing 13.8 PPG with 8.2 RPG and a team-high 8.8 APG to cap off the group of double-digit scorers so far for the Sixers in the playoffs. As a team, Philadelphia is averaging 119.6 PPG on 52% shooting from the field, 40% from three and 70% from the foul line while allowing 111.2 PPG on 45.7% shooting from the field and 35.6% from three this postseason.

This really is a hard game to call because I think a case could be made both ways in both the side and total. With that said, I’m leaning towards the under here as I can see this being a more physical game with neither side really wanting to give up an inch and with so much at stake in game five, I could see the referees putting their whistles away a little bit more. Give me the under here.