The Utah Jazz take a trip to the Toyota Center to do battle with the Houston Rockets on Wednesday night.

The Utah Jazz have been in decent shape as they’ve won five of their past seven games and they will be looking to stay hot after routing the shorthanded Lakers in a 111-97 road win on Monday. Jordan Clarkson led the team in scoring with 22 points off the bench, Joe Ingles added 21 points with five assists on eight of 11 shooting, Bojan Bogdanovic scored 19 points while Mike Conley chipped in with 14 points and 10 assists. As a team, the Jazz shot a sizzling 57 percent from the field and 15 of 33 from the 3-point line as they got off to a solid start and held the Lakers to just 19 points in the second quarter to take a 10-point lead into halftime, before pouring in 33 points in the third quarter where the margin ballooned to 25 points.

Meanwhile, the Houston Rockets have been in terrible form as they’ve lost 33 of their past 37 games overall and they will be hoping to bounce back after getting routed by the Heat in a 113-91 road loss on Monday. Christian Wood led the team with 19 points and two blocks, Kevin Porter Jr. added 18 points while John Wall chipped in with 14 points and six assists. As a team, the Rockets shot just 38 percent from the field and nine of 38 from the 3-point line as they got off to a nice start to take the lead at halftime, but they couldn’t keep up the pace as they got outscored in the second half by 59-36. Wall had a rough shooting night as he made just four of 14 from the field while Aaron Brooks scored just eight points on three of 12 shooting off the bench.

The Jazz have been on a nice run lately and they took plenty of confidence from their easy win over the Lakers on Monday, while the Rockets have been ice-cold lately as they’ve lost 33 of their last 37 games and they were hardly competitive in their blowout loss to the Heat in their last outing. The Jazz will again be without Donovan Mitchell and Ersan Ilyasova, but they should still have no problem taking care of business in this one. 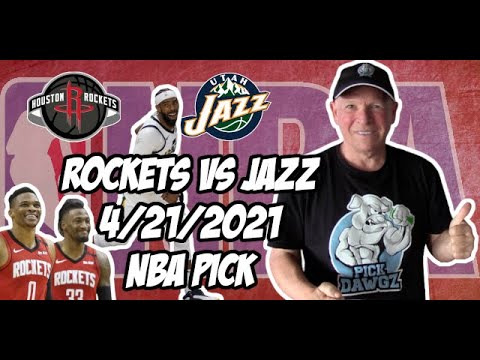