The Phoenix Suns invade the Wells Fargo Center to take on the Philadelphia 76ers on Wednesday night.

The Phoenix Suns have been in great shape as they’ve won 12 of their past 14 games and they will be looking to stay hot after outlasting the Bucks in a 128-127 overtime road win on Monday. Devin Booker led the team with 24 points with seven assists, Chris Paul added 22 points with 13 assists, Mikal Bridges scored 21 points on eight of 11 shooting while DeAndre Ayton chipped in with 20 points and 13 rebounds. As a team, the Suns shot 48 percent from the field and 17 of 42 from the 3-point line as they rallied back from a nine-point deficit to force overtime where they escaped by the skin of their teeth after Booker drew the foul with just 0.3 seconds remaining.

Meanwhile, the Philadelphia 76ers have been on a nice run as they’ve won seven of their past 10 games, but they will be hoping to bounce back after having their four-game win streak halted by the Warriors in a 107-96 home loss on Monday. Joel Embiid led the team with 28 points, 13 rebounds and eight assists, Seth Curry added 15 points with five assists while Danny Green chipped in with 12 points. As a team, the 76ers shot just 39 percent from the field and 12 of 32 from the 3-point line as they hung with the Warriors in the first half, before going ice-cold in the third quarter where they managed just 15 points. Shake Milton scored just five points on one of seven shooting off the bench while George Hill scored just two points on one of five shooting.

Dario Saric is listed as questionable for the Suns with an ankle sprain, while Ben Simmons and Tobias Harris are listed as questionable for the 76ers in this one. The Suns have quietly been one of the hottest teams lately and their confidence must be sky-high after outlasting the Bucks in a thrilling overtime win on Monday. The 76ers have managed to keep their heads above water despite dealing with a few injuries, but they will be particularly shorthanded here with Simmons and Harris likely sitting this one out. The 76ers still have enough firepower to get the win in this spot, but I think the smart play is on the Suns with the short line. 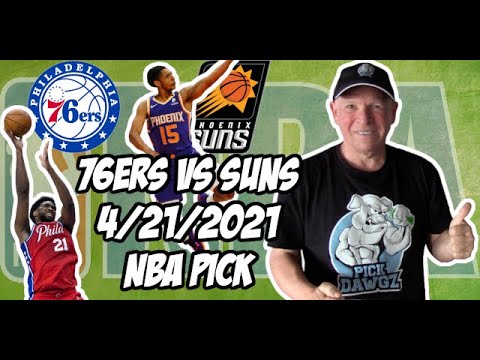