The Brooklyn Nets and the Toronto Raptors collide at the Amalie Arena on Wednesday night.

The Brooklyn Nets have been in decent shape as they’ve won five of their past nine games and they will be looking to stay hot after outlasting the Pelicans in a 134-129 overtime road win on Tuesday. Kyrie Irving led the team with 32 points and eight assists on 12 of 19 shooting, Joe Harris added 24 points on 10 of 16 shooting, Landry Shamet scored 18 points with eight assists while Blake Griffin chipped in with 16 points off the bench. As a team, the Nets shot a healthy 55 percent from the field and 14 of 37 from the 3-point line as they got off to a sluggish start and trailed the Pelicans by as many as 13 points, before exploding for 77 points in the second half to come out on top. Defensively, the Nets have plenty of room for improvement as they allowed the Pelicans to shoot 56 percent from the field for the game, but they balanced on offense as they had seven players finish in double figures in scoring.

Meanwhile, the Toronto Raptors have been in decent shape as they’ve won six of their past 10 games and they will be gunning for a fourth straight victory after taking down the Thunder in a 112-106 home win on Sunday. Chris Boucher led the team with 31 points and 12 rebounds on 10 of 16 shooting, Gary Trent Jr. added 23 points with five steals while Malachi Flynn chipped in with 15 points, seven rebounds and five assists. As a team, the Raptors shot just 38 percent from the field and 17 of 38 from the 3-point line as they struggled in the first half and trailed by 12 points, before taking over in the second half where they outscored the Thunder by 60-47. Khem Birch scored just seven points on two of nine shooting while Paul Watson finished scoreless on zero of 10 shooting.

Head to head, the over is 5-2 in the last seven meetings in Toronto and the Nets are 1-4 ATS in the last five meetings overall.

The Nets were good enough to outlast the Pelicans in a thrilling overtime road win last night with everyone picking up the slack for the injured Kevin Durant and James Harden and they’ll like their chances against an inconsistent Raptors team who only just scraped past the slumping Thunder on Sunday. The Raptors have the advantage of extra rest as they haven’t played since Sunday, but you never know who’s going to line up for them on a nightly basis. You could make an argument for either side here, but I’m sticking with the Nets to stay hot with a win and cover here. 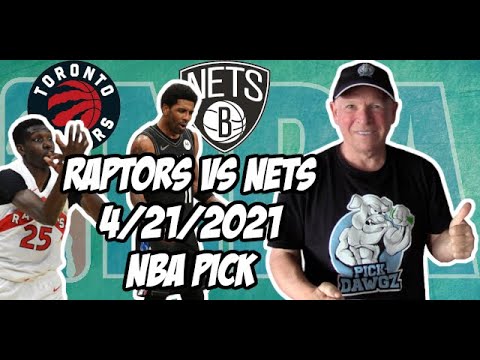