The Miami Heat play host to the Houston Rockets at the American Airlines Arena on Monday night.

The Houston Rockets have been in dreadful form as they’ve lost 32 of their past 36 games overall, but they will be looking to build some momentum after arresting a five-game slide with a 114-110 road win over the Magic last night. Christian Wood led the team with 25 points and 10 rebounds, Kelly Olynyk added 24 points with seven rebounds and four assists while Kevin Porter Jr. chipped in with 22 points and seven assists. As a team, the Rockets shot 51 percent from the field and 16 of 34 from the 3-point line as they rallied back from an early 12-point deficit, before taking over in the third quarter where they outscored the Magic by 32-18. John Wall sat out the game to rehab his left Achilles while Danuel House Jr. sat out with a sprained right ankle.

Meanwhile, the Miami Heat have been in great shape as they’ve won seven of their past 11 games and they will be looking to stay hot after outlasting the Nets in a 109-107 home win last night. Bam Adebayo led the team with 21 points, 15 rebounds and five assists, Goran Dragic added 18 points with eight rebounds and seven assists off the bench while Kendrick Nunn chipped in with 17 points. As a team, the Heat shot 44 percent from the field and 16 of 39 from the 3-point line as they got off to a quick start with 64 points in the first half, before escaping on a buzzer-beating shot from Adebayo. Jimmy Butler sat out the game with an ankle sprain and is listed as questionable for Monday.

The Heat could once again be shorthanded as Butler is listed as questionable for this one, but they would’ve taken so much confidence from last night’s thrilling upset win over the Nets. The Rockets were ice-cold before last night’s win over the slumping Magic, but they should be shorthanded once again and will find it tough to keep up with a Heat team coming off their best win of the season. 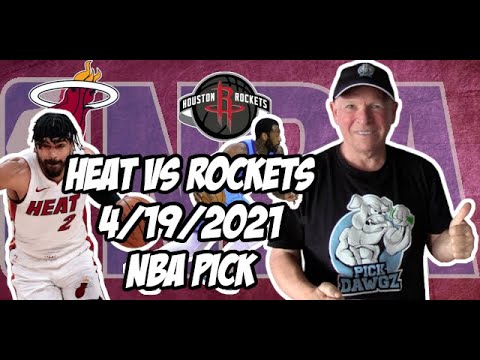