The Portland Trailblazers invade the Spectrum Center to take on the Charlotte Hornets on Sunday night.

The Portland Trailblazers have been in decent shape as they’ve won seven of their past 12 games and they will be looking to stay hot after outlasting the Spurs in a 107-106 road win on Friday. CJ McCollum led the team with 29 points on 13 of 26 shooting, Norman Powell added 22 points with four assists, Anfernee Simons scored 16 points while Enes Kanter chipped in with 10 points and 13 rebounds. As a team, the Trailblazers shot 46 percent from the field and 11 of 29 from the 3-point line as they struggled in the first half and fell behind by as many as 16 points, before winning by the smallest margin thanks to a layup from Powell with just 22.8 seconds left on the clock. Damian Lillard sat out the game with a right hamstring injury and his status for Sunday is uncertain.

Meanwhile, the Charlotte Hornets will be eager to put an end to a four-game slide after getting routed by the Nets in a 130-115 road loss on Friday. Miles Bridges led the team with 33 points on 13 of 18 shooting, Terry Rozier added 27 points with 10 assists while Vernon Carey Jr. chipped in with 21 points on nine of 14 shooting. As a team, the Hornets shot 53 percent from the field and 12 of 34 from the 3-point line as they got off to a quick start with 35 points in the first quarter which was enough to keep pace with the Nets in the first half, but the Nets shifted into another gear in the second half where they poured in 69 points to win in a blowout.

The Trailblazers are coming into this game in decent form, but they will be shorthanded once again as Damian Lillard has been ruled out with that hamstring injury. The Hornets are sweating on the availability of PJ Washington and Devonte’ Graham who are both listed as questionable, because Malik Monk, LaMelo Ball and Gordon Hayward have all been ruled out. Both teams will be shorthanded here, but there’s just more to like about the Trailblazers in this spot as they just have more depth to cover for their injuries at this stage. I’m expecting a close one, but in the end I have the Trailblazers getting the win behind a big game from McCollum. 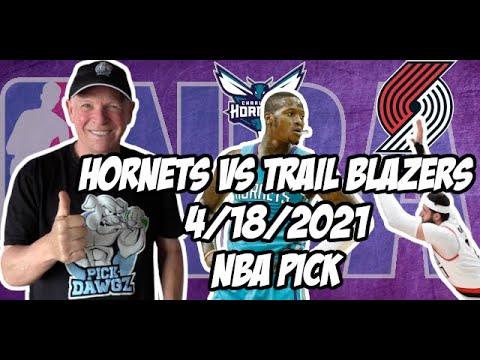