The Brooklyn Nets invade the Miami Heat at the American Airlines Arena on Sunday afternoon.

The Brooklyn Nets have been in fine form as they’ve won eight of their last 11 games and they will be looking to stay hot after making light work of the Hornets in a 130-115 home win on Friday. Joe Harris drained six 3-pointers on his way to 26 points, Kevin Durant added 25 points with 11 assists while Landry Shamet chipped in with 20 points off the bench. As a team, the Nets shot a healthy 55 percent from the field and 21 of 41 from the 3-point line as they poured in 32 points in the second quarter to tie the scores at halftime following a slow start, before exploding for 69 points in the second half to win comfortably in the end.

Meanwhile, the Miami Heat have been in a bit of a rut as they’ve lost four of their past six games and they will be hoping to arrest a three-game slide after falling short against the Timberwolves in a 119-111 road loss on Friday. Jimmy Butler led the team with 30 points, 10 rebounds and eight assists, Trevor Ariza added 21 points with seven rebounds and two blocks, Bam Adebayo scored 17 points on seven of eight shooting, while Goran Dragic chipped in with 15 points off the bench. As a team, the Heat shot 48 percent from the field and 14 of 34 from the 3-point line as they poured in 37 points in the first quarter to lead for most of the game, before getting run down in the fourth quarter where they were outscored by 31-18.

Jimmy Butler and Andre Iguodala are both listed as questionable while Victor Oladipo has been ruled out so the Heat could be severely shorthanded here, while the Nets will again be without James Harden. It’s hard to figure out why the Heat have been struggling so much lately, but I don’t see them improving if Butler is on the sidelines, so I’m going with the more consistent Nets to take care of business in this one. 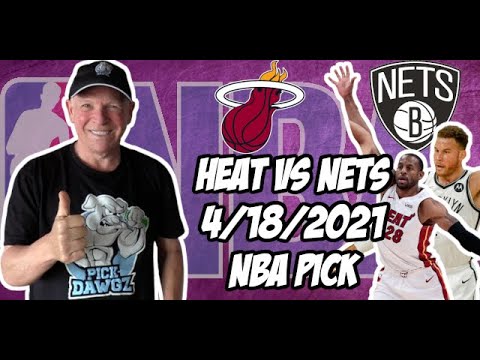