The Oklahoma City Thunder and the Detroit Pistons duke it out at Little Caesars Arena on Friday night.

The Oklahoma City Thunder have been in terrible shape as they’ve lost 11 of their last 12 games and they will be hoping to snap an eight-game losing streak after getting routed by the Warriors in a 147-109 home loss on Wednesday. Darius Bazley led the team with 22 points on 10 of 18 shooting, Moses Brown added 18 points with 12 rebounds and two blocks while Svi Mykhailiuk chipped in with 14 points on six of 11 shooting. As a team, the Thunder shot just 47 percent from the field and seven of 27 from the 3-point line as they fell behind by 21 points going into halftime, before getting completely blown out in the third quarter where the Warriors exploded for 50 points.

Meanwhile, the Detroit Pistons have been in a funk of their own as they’ve lost four of their last five games and they will be hoping to snap a three-game skid after falling just short to the Clippers in a 100-98 home loss on Wednesday. Jerami Grant led the team with 28 points on 10 of 21 shooting, Saddiq Bey added 17 points while Miles Plumlee chipped in with 11 points, nine rebounds and four assists. As a team, the Pistons shot 43 percent from the field and seven of 24 from the 3-point line as they led by as many as 11 points in the fourth quarter, only to see the Clippers escape on a clutch shot from Reggie Jackson with just 2.8 seconds remaining.

Aleksej Pokusevski, Mike Muscala and Shai Gilgeous-Alexander are all listed as out for Friday so the Thunder will be severely depleted once again, while the Pistons are still without Cory Joseph, Dennis Smith Jr and Wayne Ellington while Jerami Grant is being rested. Two of the coldest teams in the league collide in this one and neither team is anywhere near full strength, so it’s really hard to know what to expect in this one. You couldn’t bet your money on either team with much confidence, but there’s just a little more to like about the Pistons who almost took down the Clippers on Wednesday. 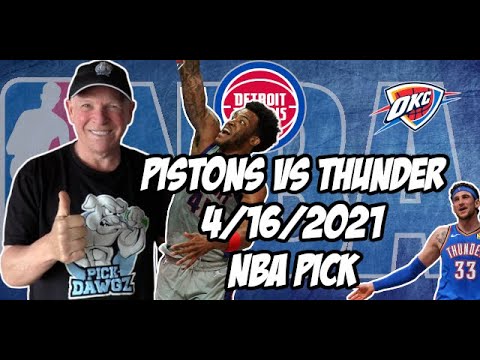