The Milwaukee Bucks travel to the State Farm Arena to battle the Atlanta Hawks on Thursday night.

The Milwaukee Bucks have been in decent shape as they’ve won five of their past eight games and they will be gunning for a third straight win after blowing past the Timberwolves in a 130-105 road win last night. Khris Middleton led the team with 27 points, eight rebounds and seven assists, Brook Lopez added 18 points with eight rebounds and two blocks while Jrue Holiday chipped in with 15 points. As a team, the Bucks shot 46 percent from the field and 19 of 40 from the 3-point line as they poured in 37 points in the second quarter to take a 17-point lead into halftime, before exploding for 45 points in the third quarter to push the margin out to 30 points.

Meanwhile, the Atlanta Hawks have been in great form as they’ve won seven of their past eight games and they will be looking to build on their current four-game win streak after taking down the Raptors in a 108-103 road win on Tuesday. Bogdan Bogdanovic led the team with 23 points, six rebounds and four assists, Clint Capela added 19 points with 21 rebounds, Brandon Goodwin scored 18 points while Kevin Huerter chipped in with 17 points. As a team, the Hawks shot 47 percent from the field and 13 of 30 from the 3-point line as they poured in 38 points in the second quarter to take a 15-point lead, before holding on for the narrow win after scoring just 18 points in the fourth quarter.

Head to head, the over is 5-1 in the last six meetings in Atlanta and the Bucks are 5-11 ATS in the last 16 meetings overall.

Giannis Antetokounmpo has yet to make his return to the lineup, but he sat out last night’s game and could make his return here. The Hawks could be shorthanded once again as Trae Young and Danilo Gallinari are both listed as questionable for this one. This one is tough to pick as they are so many key players likely sitting this one out, but the Hawks’ depth is being stretched here and I like the Bucks’ chances with Holiday and Middleton. 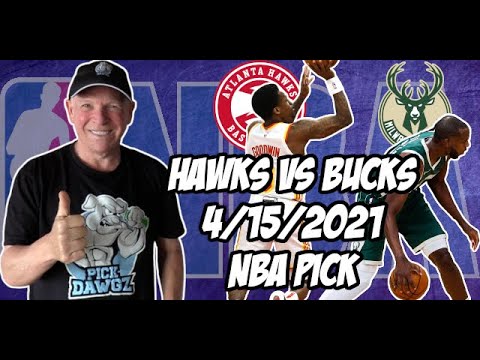