The Los Angeles Clippers and the Detroit Pistons duke it out once again at Little Caesars Arena on Wednesday night.

The Los Angeles Clippers have been on a tear as they’ve won 12 of their past 14 games and they will be looking to build on their current six-game win streak after taking down the Pacers in 126-115 road win last night. Paul George led the team with 36 points, seven rebounds and eight assists, Marcus Morris added 22 points on nine of 12 shooting while Ivica Zubac and Nicolas Batum each scored 14 points. As a team, the Clippers shot 53 percent from the field and 13 of 28 from the 3-point line as they took control of the game with 36 points in the second quarter, before they held the Pacers to just 18 points in the fourth quarter to allow them to run away with it.

Meanwhile, the Detroit Pistons have been in a rut lately as they’ve lost nine of their past 13 games and they will be looking for revenge after falling short to the Clippers in a 131-124 road loss on Sunday. Josh Jackson led the team with 26 points on 10 of 18 shooting, Saddiq Bey added 25 points on eight of 12 shooting, Cory Joseph scored 18 points with 13 assists while Frank Jackson scored 16 points off the bench. As a team, the Pistons shot 52 percent from the field and 15 of 32 from the 3-point line as they got off to a quick start with 35 points in the first quarter and worked their way to a 12-point lead late in the third quarter, only to get blown out in the fourth quarter where the Clippers exploded for 37 points to come out on top.

The Clippers have been running through teams lately as five of their last six games have been by double-digits, so it’s hard to imagine anything but an easy win over the struggling Pistons. It’s always tough to beat the same team twice in a row and the Pistons will be well-rested as they haven’t played since Sunday, but I’m sticking with the Clippers to maintain their momentum with another big win here. 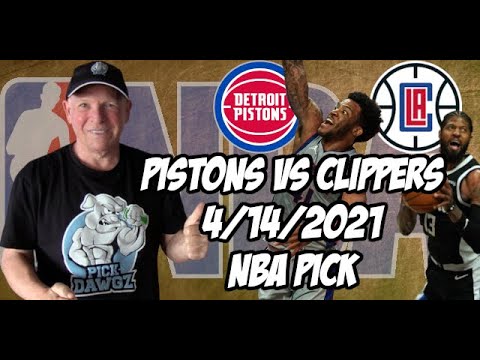