The Philadelphia 76ers invade the Chesapeake Energy Arena to take on the Oklahoma City Thunder on Saturday night.

The Philadelphia 76ers have been in decent shape as they’ve won three of their past five games, but they are coming into this one looking to bounce back after getting stopped by the Pelicans in a 101-94 road loss last night. Tobias Harris led the team with 23 points, seven rebounds and three assists, Joel Embiid had a rough night as he scored just 14 points on five of 16 shooting while Furkan Korkmaz chipped in with 12 points off the bench. As a team, the 76ers shot just 41 percent from the field and 11 of 31 from the 3-point line as they fought hard to tie the game at halftime after a sloppy start, but they were always fighting an uphill battle after scoring just 18 points in the third quarter. Embiid wasn’t anywhere near his best in this one, but they got next to no support from their bench and Seth Curry finished scoreless on zero of seven shooting.

Meanwhile, the Oklahoma City Thunder have been in a major slump as they’ve lost eight of their past nine games and they will be hoping to put an end to a five-game slide after getting routed by the Cavaliers in a 129-102 home loss on Thursday. Ty Jerome led the team in scoring with 23 points on nine of 16 shooting off the bench, Theo Maledon scored 14 points with four assists while Kenrich Williams chipped in with 12 points, seven rebounds and nine assists. As a team, the Thunder shot 44 percent from the field and 13 of 32 from the 3-point line as they hung tough in a free-flow first half, before getting suffocated in the second half where they were outscored by 64-41. Aleksej Pokusevski had a night to forget as he finished with just 10 points on three of 12 shooting.

The 76ers haven’t been at their best lately, but they will still be so disappointed from their effort in last night’s loss to the Pelicans, especially Embiid who was just cold all night. The Thunder have been the coldest team in the league recently as they’ve lost their last five games, all of which were by double-digits, so I’m not expecting anything but an easy win for the 76ers here. The 76ers are playing this one on zero days’ rest and Embiid might decide to sit this one out being the second game of a back to back set, but the Thunder are getting blown out by everyone at the moment. 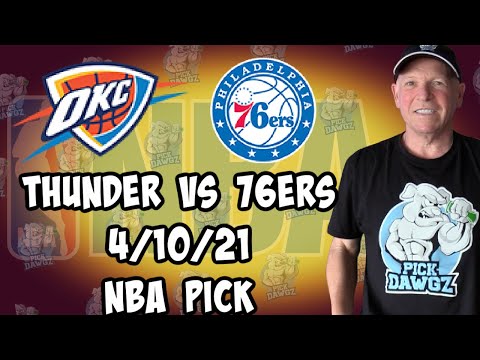