The New Orleans Pelicans and the Brooklyn Nets collide at the Barclays Center on Wednesday night.

The New Orleans Pelicans have been in a rut as they’ve lost three of their past four games and they will be hoping to bounce back in a big way after getting routed by the Hawks in a 123-107 road loss last night. Zion Williamson led the team with 34 points on 12 of 18 shooting, Eric Bledsoe added 14 points with four assists while Lonzo Ball chipped in with 12 points, nine rebounds and 11 assists. As a team, the Pelicans shot just 40 percent from the field and 12 of 38 from the 3-point line as they scored 61 points in the first half to keep pace with the Hawks, until the third quarter where the Hawks exploded for 46 points to pull away and win easily. Lonzo Ball shot just four of 15 from the field, while Naji Marshall scored just eight points on two of 10 shooting.

Meanwhile, the Brooklyn Nets have been in great form as they’ve won 21 of their past 25 games and they will be looking to stay hot after sneaking past the Knicks in a 114-112 home win on Monday. Kyrie Irving led the team with 40 points and seven assists on 15 of 28 shooting, Jeff Green added 23 points while Joe Harris chipped in with 16 points on seven of 11 shooting. As a team, the Nets shot 45 percent from the field and 10 of 32 from the 3-point line as they rallied back from a 14-point deficit to escape with the narrow win as the Knicks just missed on the last-second shot that would’ve sent the game into overtime. James Harden started but played just four minutes before leaving the game with a right hamstring injury.

The Pelicans have fallen off the pace lately with three losses in their last four games and the return of Zion Williamson wasn’t enough as the Hawks were too much for them last night. The Nets have plenty of injury concerns themselves as James Harden is expected to miss at least another week or so, but they still have Irving who is coming off a 40-point performance. The Nets are clearly the better team in better form, but this just seems like too many free points to be giving this Pelicans team who are 4-1 ATS in their last five road games. I think the Nets get the win, but I’m backing the Pelicans to hang around and keep this one to single digits. 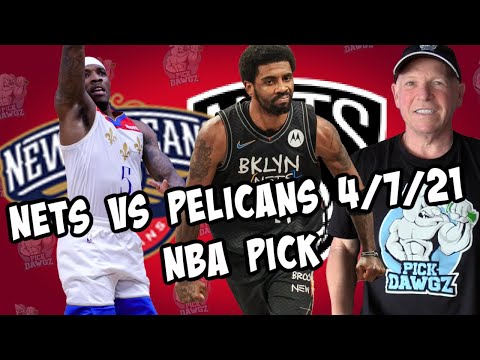