The New Orleans Pelicans pay a visit to the Atlanta Hawks at the State Farm Arena on Tuesday night.

The New Orleans Pelicans have been in good form lately as they’ve won five of their past eight games and they will be looking to stay hot after taking down the slumping Rockets in a 122-115 road win on Sunday. Lonzo Ball drained a career-high eight 3-pointers to lead the team with 27 points and nine assists, Eric Bledsoe added 19 points, James Johnson scored 18 points with four blocks while Steven Adams chipped in with 12 points and 11 rebounds. As a team, the Pelicans shot 46 percent from the field and 16 of 37 from the 3-point line as they set the tone with 38 points in the first quarter, before rallying in the fourth quarter after squandering an early 14-point lead. Brandon Ingram and Zion Williamson were both out injured for this one and their statuses for Tuesday remains unclear.

Meanwhile, the Atlanta Hawks have been in great form as they’ve won 12 of their past 16 games and they will be looking to build on their current three-game win streak after sneaking past the Warriors in a 117-111 home win on Sunday. Danilo Gallinari led the team in scoring with 25 points and 10 rebounds on five of eight shooting off the bench, Clint Capela added 24 points with 18 rebounds and two blocks while Lou Williams chipped in with 15 points. As a team, the Hawks shot just 43 percent from the field and 12 of 32 from the 3-point line as they found themselves in a real wrestling match against the Warriors until the fourth quarter where they exploded for 38 points to come out on top. Trae Young had a quiet game as he finished with just 13 points and seven turnovers on three of 11 shooting.

Head to head, the under is 4-1 in the last five meetings in Atlanta and the Pelicans are 0-6 ATS in the last six meetings overall.

Brandon Ingram and Zion Williamson are both listed as questionable for Tuesday while Nickeil Alexander-Walker has been ruled out, so the Pelicans could be severely shorthanded once again, while the Hawks are still without John Collins and De’Andre Hunter. The Pelicans were far from convincing in their narrow win over the ice-cold Rockets, but they got plenty of production from Ball who is coming off a career shooting night. However, the Pelicans are 0-6 ATS in the last six meetings overall and I just can’t go past the Hawks to keep that trend going. 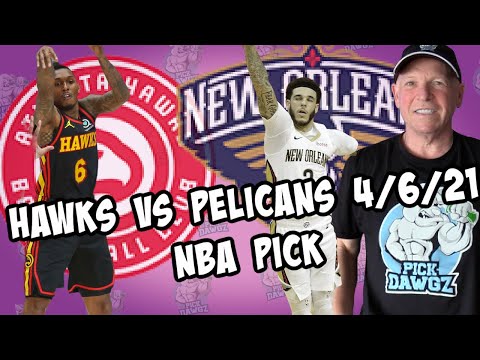