The New York Knicks pay a visit to the Brooklyn Nets at the Barclays Center on Monday night.

The New York Knicks have been in decent form as they’ve won five of their past nine games and they will be looking to build some momentum after snapping a three-game skid with a 125-81 road win over the Pistons on Saturday. Julius Randle led the team with 29 points, eight rebounds and three assists, Reggie Bullock added 22 points on eight of 12 shooting, RJ Barret scored 14 points while Elfrid Payton chipped in with 11 points and nine assists. As a team, the Knicks shot 54 percent from the field and 19 of 39 from the 3-point line as they stormed out of the gates with 41 points in the first quarter to take the early double-digit lead, before running away with it in the second half where they poured in another 65 points.

Meanwhile, the Brooklyn Nets have been in stellar form as they’ve won 20 of their past 24 games, but they will be hoping to bounce back here after having their four-game win streak halted by the Bulls in a 115-107 road loss last night. Kyrie Irving led the team with 24 points and 15 assists, Landry Shamet added 13 points off the bench, LaMarcus Aldridge and Joe Harris each scored 11 points while Blake Griffin chipped in with 10 points, eight rebounds and two assists. As a team, the Nets shot 48 percent from the field and 11 of 28 from the 3-point line as they fell behind by 11 points at halftime after scoring just 18 points in the second quarter and things only got worse in the third quarter where they fell behind by 18 points.

James Harden sat out last night’s game with a hamstring injury and is listed as questionable for Monday so the Nets could be severely shorthanded once again. The Knicks fell off the pace with three straight losses, but they’re still coming into this game with plenty of confidence after beating the Pistons by 44 points on Saturday. The Knicks have the advantage of an extra days rest and they are 6-1 ATS in the last seven meetings in Brooklyn, so that’s where I’m leaning in this one. 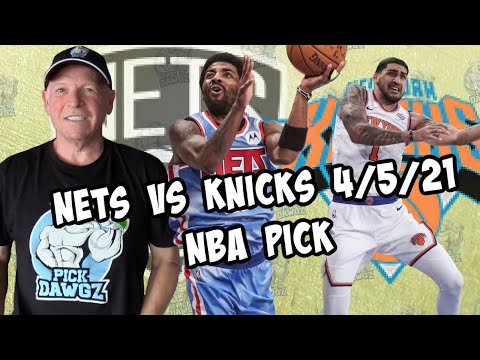