The Brooklyn Nets travel to the United Center to take on the Chicago Bulls on Sunday afternoon.

The Brooklyn Nets have been in stellar form as they've won 20 of their last 23 games and they will be looking to build on a current four-game win streak after routing the Hornets in a 111-89 home win on Thursday. Jeff Green led the team with 21 points, Landry Shamet added 17 points off the bench while Kyrie Irving chipped in with 15 points, 11 rebounds and eight assists. As a team, the Nets shot 48 percent from the field and 20 of 45 from the 3-point line as they came out with a level of urgency and set the tone by holding the Hornets to just 11 points in the first quarter to take a 20-point lead going into halftime. The Nets didn't slow down in the second half as they pushed the margin out to 32 points to make it a complete blowout.

Meanwhile, the Chicago Bulls have been in a real slump as they've lost eight of their past nine games and they will be hoping to put an end to a six-game slide after falling short to the Jazz in a 113-106 road loss on Friday. Thaddeus Young led the team with 25 points on 11 of 17 shooting, Zach LaVine added 23 points on 10 of 22 shooting while Nikola Vucevic chipped in with 16 points, eight rebounds and four assists. As a team, the Bulls shot 48 percent from the field but just seven of 28 from the 3-point line as they fell behind by as many as 17 points, before pouring in 33 points in the fourth quarter to get to within three points with 26.7 seconds remaining.

James Harden is listed as questionable for the Nets, while the Bulls have a couple of key players listed as questionable in Zach LaVine and Coby White. It's always tough picking games that will likely have key players missing, but the Nets are clearly the team in better form and they are 4-0 ATS in the last four meetings in Chicago, so that's where I'm leaning in this one. 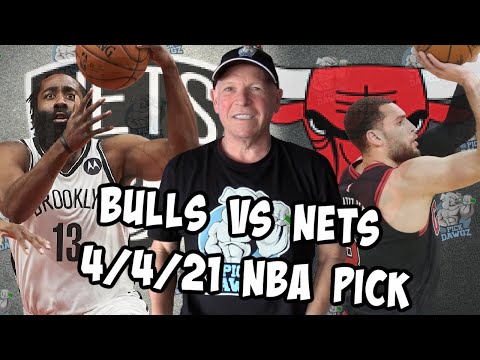