The New York Knicks have been in decent shape as they've split their last eight games, but they will be hoping to snap a three-game skid after last night's 99-86 loss to the Mavericks. Alec Burks led the team with 20 points on six of 11 shooting off the bench, Julius Randle added 14 points with eight rebounds and 11 assists while Reggie Bullock chipped in with 13 points. As a team, the Knicks shot just 36 percent from the field and 12 of 38 from the 3-point line as they fought hard to hang with the Mavericks until going ice-cold in the fourth quarter where they managed just 17 points. Randle shot just five of 20 from the field, RJ Barrett shot just three of 11 from the field while Derrick Rose shot just one of 10 from the field.

Meanwhile, the Detroit Pistons have been in a slump lately as they've lost nine of their past 13 games, but they will be aiming to stay hot after blowing past the Wizards in a 120-91 home win on Thursday. Josh Jackson led the team with 31 points on 13 of 21 shooting, Miles Plumlee added 13 points with 11 rebounds and seven assists, while Frank Jackson chipped in with 13 points off the bench. As a team, the Pistons shot 47 percent from the field and 12 of 29 from the 3-point line as they set the tone with 32 points in the first quarter to jump out to an early double-digit lead, before running away with it in the second half where. Jerami Grant has been the leading scorer for the Pistons but was hardly needed as he scored just 12 points before resting in the fourth quarter.

Head to head, the Knicks are 4-0 ATS in the last four meetings overall.

The Pistons were impressive in their big win over the struggling Wizards in their last outing, but these wins have been few and far between as they're still experimenting with different lineups on a nightly basis. The Knicks have enjoyed more continuity, but they've been in a bit of a funk with three straight losses. The Knicks are too good to stay in the rut they've been in and I think they snap out of it with a much-needed win in this one. 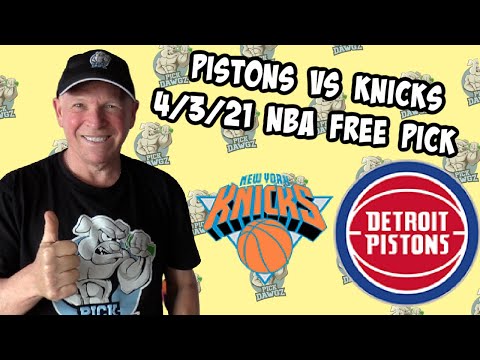