The Dallas Mavericks and the Washington Wizards duke it out at the Capital One Arena on Saturday night.

The Dallas Mavericks have been in fine form as they've won five of their past seven games and they will be looking to build on their current three-game win streak after routing the Knicks in a 99-86 road win last night. Luka Doncic led the team with 26 points, eight rebounds and seven assists, Jalen Brunson added 15 points with seven rebounds and five assists off the bench while Kristaps Porzingis and Tim Hardaway Jr. each scored 14 points. As a team, the Mavericks shot 46 percent from the field and 12 of 37 from the 3-point line, but this win was about their defense as they held the Knicks to just 21 points in the second quarter to take the lead at halftime, before holding the Knicks to just 17 points in the fourth quarter to make it a blowout.

Meanwhile, the Washington Wizards have been in rough shape as they've lost 10 of their past 13 games and they will be hoping to put an end to a two-game skid after getting thrashed by the slumping Pistons in a 120-91 road loss on Thursday. Russell Westbrook led the team with a triple-double of 16 points with 11 rebounds and 12 assists, Robin Lopez added 16 points off the bench, Alex Len scored 14 points while Rui Hachimura chipped in with 10 points. As a team, the Wizards shot 47 percent from the field and a miserly five of 19 from the 3-point line as they got off to a slow start and trailed by 22 points at halftime, before getting completely blown out in the fourth quarter as the Pistons finished in a flurry.

Here we have two teams headed in opposite directions as the Mavericks have been in great shape and they only seem to be getting better, while the Wizards have been in terrible form and just lost to the slumping Pistons by 29 points. I might be interested in the Wizards if the line was heftier, but as it stands, I'm staying with the Mavericks to maintain their momentum with an easy win in this spot. 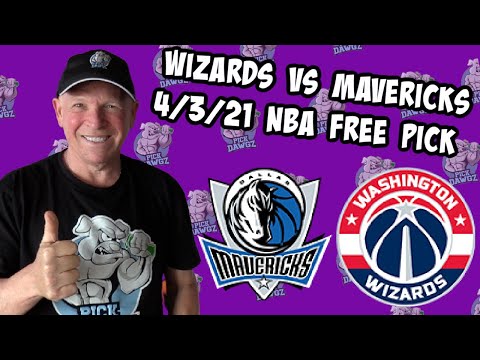