The Portland Trailblazers pay a visit to the Detroit Pistons at Little Caesars Arena on Wednesday night.

The Portland Trailblazers have been in great shape as they’ve won 10 of their past 14 games and they will be looking for a fourth straight win after sneaking past the slumping Raptors in a 122-117 road win on Sunday. CJ McCollum led the team with 23 points, seven rebounds and five assists, Damian Lillard added 22 points with 11 assists, Derrick Jones Jr. scored 16 points on seven of nine shooting off the bench while Robert Covington and Norman Powell each scored 13 points. As a team, the Trailblazers shot 47 percent from the field and 10 of 34 from the 3-point line as they allowed 41 points in the first quarter to fall behind early, before taking control of the game in the third quarter where they held the Raptors to just 10 points.

Meanwhile, the Detroit Pistons have been in a slump as they’ve lost eight of their past 11 games, but they will be looking to build some momentum after arresting a four-game slide with a 118-104 upset win over the Raptors on Monday. Saddiq Bey, Hamidou Diallo and Saben Lee each scored 19 points, Cory Joseph added 17 points with five assists while Isaiah Stewart chipped in with 14 points. As a team, the Pistons shot 50 percent from the field and 15 of 30 from the 3-point line as they came out firing and stormed their way to a 16-point lead at halftime, before pushing the margin out to 23 points in the third quarter as they cruised to victory.

This is a classic case of two teams headed in opposite directions as the Trailblazers have won 10 of their last 14 games and they’re just about at full strength now, while the Pistons have been struggling to win games and are clearly moving towards a full rebuild. The Trailblazers’ last three wins have come by single digits, but I think they break loose and win by double digits in this one as the Pistons don’t have the firepower to keep up with them. 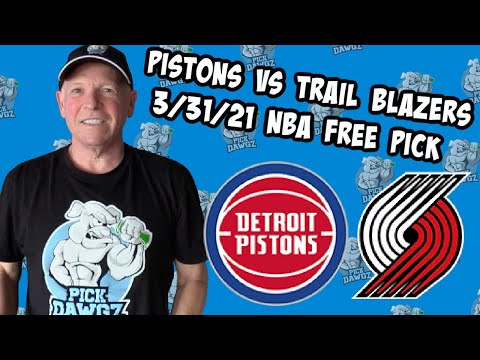