The Toronto Raptors and the Detroit Pistons do battle at Little Caesars Arena on Monday night.

The Toronto Raptors have been in a serious slump as they’ve lost 11 of their last 12 games and they will be hoping to avoid a third straight loss after last night’s 122-117 home loss to the shorthanded Trailblazers who were without their best player in Damian Lillard. Pascal Siakam led the team with 26 points on eight of 16 shooting, Fred VanVleet added 20 points with eight assists, OG Anunoby scored 19 points with 10 rebounds and three assists while Chris Boucher chipped in with 18 points off the bench. As a team, the Raptors shot 44 percent from the field and 14 of 42 from the 3-point line as they jumped out of the gates with 41 points in the first quarter, before going ice-cold in the third quarter where they managed just 10 points which has been a worrying trend for them this season.

Meanwhile, the Detroit Pistons have been in a slump of their own as they’ve lost eight of their past 10 games and they will be hoping to put an end to a four-game skid after getting routed by the Wizards in a 106-92 road loss on Saturday. Wayne Ellington led the team with 15 points while Miles Plumlee and Isaiah Stewart each scored 11 points, but no other player finished in double figures in scoring. As a team, the Pistons shot just 38 percent from the field and 10 of 29 from the 3-point line as they fought hard to cut a 30-point deficit to just three points early in the fourth quarter, before getting blown out again late. Jerami Grant had a night to forget as he scored just nine points on four of 12 shooting before leaving with a bruised quad.

Head to head, the over is 5-2 in the last seven meetings overall.

The Raptors haven’t been able to build any momentum lately and their confidence must’ve taken another hit thanks to last night’s loss to the shorthanded Trailblazers. The Pistons haven’t been much better as they’re currently on a four-game slide, but they do have the advantage of an extra days rest. This isn’t a game many NBA fans will be watching, but I think the Raptors can finally get going with a much-needed win here. 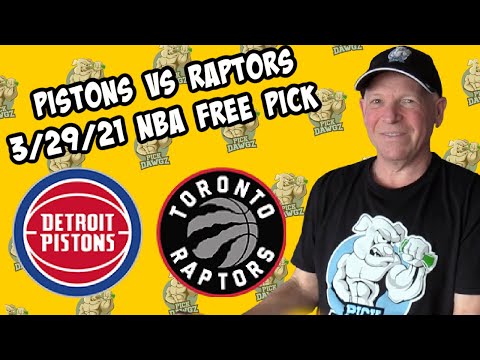