The Toronto Raptors play host to the Portland Trailblazers at the Amalie Arena on Sunday night.

The Portland Trailblazers have been in fine form as they’ve won five of their past seven games and they will be aiming for a third straight victory after sneaking past the Magic in a 112-105 road win on Friday. Norman Powell led the team with 22 points in his first game with his new team, CJ McCollum added 22 points with seven assists on eight of 26 shooting while Enes Kanter, Anfernee Simons and Robert Covington scored 15 points apiece. As a team, the Trailblazers shot 47 percent from the field and 18 of 40 from the 3-point line as they came out strong and built a 10-point lead going into halftime, before pulling away in the fourth quarter with 32 points to come away with the hard-fought win without their best player in Damian Lillard who was out with a bruised left knee.

Meanwhile, the Toronto Raptors have been in a major slump as they’ve lost 10 of their past 11 games and they will be hoping to bounce back after falling just short to the Suns in a 104-100 home loss on Friday. Pascal Siakam led the team with 26 points, 11 rebounds and six assists, Fred VanVleet drained six 3-pointers on his way to 22 points, OG Anunoby scored 15 points while Kyle Lowry chipped in with 11 points and six assists. As a team, the Raptors shot just 41 percent from the field and 12 of 45 from the 3-point line as they cut a 14-point deficit to just two with 36 seconds remaining, only to fall just short as they allowed an offensive rebound to rob them of a chance to steal the game late.

Damian Lillard sat out on Friday with a bruised left knee and he is currently listed as questionable for Sunday, but the Trailblazers were good enough to get the job done without him on Friday, so they will be quietly confident about their chances against a slumping Raptors team who have lost 10 of their last 11. This should be a close one, but I think there’s decent value with the Trailblazers as underdogs in this spot and I think they can get the narrow win behind a big game from McCollum. 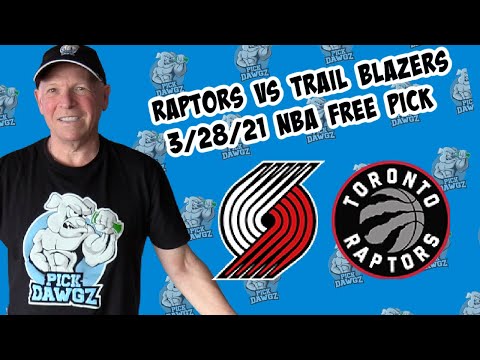