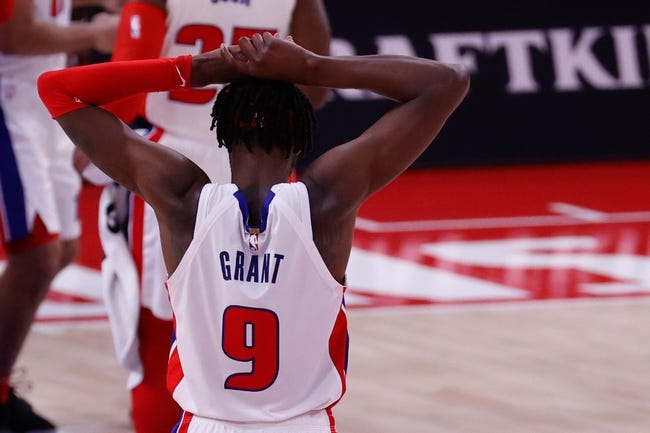 The Detroit Pistons invade the Capital One Arena to take on the Washington Wizards on Saturday night.

The Detroit Pistons have been in rough shape as they’ve lost seven of their past nine games and they will be hoping to snap a three-game skid after falling short against the Nets in a heartbreaking 113-111 home loss last night. Jerami Grant led the team with 19 points and three assists, Saddiq Bey and Frank Jackson each scored 14 points while Miles Plumlee chipped in with 13 points, 10 rebounds and five assists. As a team, the Pistons shot 45 percent from the field and 11 of 31 from the 3-point line as they rallied back from a 13-point deficit, only to fall just short as the clock expired on a putback layup that would’ve sent the game into overtime.

Meanwhile, the Washington Wizards have been in a real slump as they’ve lost 10 of their past 12 games and they will be looking to arrest a three-game slide after falling just short to the Knicks in a 106-102 road loss on Thursday. Bradley Beal led the team with 26 points and nine assists, Rui Hachimura added 21 points on nine of 16 shooting, while Russell Westbrook racked up 13 points with 18 rebounds, nine assists and four blocks. As a team, the Wizards shot 46 percent from the field and eight of 26 from the 3-point line as they dominated the first half to lead by as many as 17 points, before getting run down in the fourth quarter where the Knicks exploded for 39 points to escape with the win. Beal shot just eight of 23 from the field, while Westbrook shot just three of 15 from the field.

The Pistons haven’t been able to get much going lately and they will be kicking themselves after falling just short against the Nets last night, while the Wizards have been worse as they’ve lost 10 of their past 12 and their last three in a row. It’s hard to bet on either team with much confidence, but the Pistons are 4-0 ATS in their last four road games and 6-1 ATS in their last seven games playing on zero days’ rest, so that’s where I’m leaning in this one.