The Brooklyn Nets pay a visit to the Detroit Pistons at Little Caesars Arena on Friday night.

The Brooklyn Nets have been in great form as they’ve won 16 of their past 19 games, but they will be hoping to bounce back here after getting routed by the Jazz in a 118-88 road loss on Wednesday. Alize Johnson led the team with 23 points, 15 rebounds and three assists off the bench, Timothe Luwawu-Cabarrot added 14 points while Bruce Brown chipped in with 10 points. As a team, the Nets shot just 36 percent from the field and seven of 35 from the 3-point line, but this one was over in a heartbeat as the Nets just didn’t have the firepower to come back against the Jazz after falling behind by 21 points in the first quarter. The Nets were without their three best players in Kevin Durant, Kyrie Irving and James Harden, while new recruit Blake Griffin sat out with knee soreness.

Meanwhile, the Detroit Pistons have been in rough shape as they’ve lost 12 of their past 16 games and they will be looking to avoid a third straight loss after falling short against the Pacers in a 116-111 road loss on Wednesday. Jerami Grant led the team with 29 points on 10 of 20 shooting, Saddiq Bey and Wayne Ellington each scored 16 points while Miles Plumlee chipped in with 12 points, 10 rebounds and four assists. As a team, the Pistons shot 53 percent from the field and 11 of 28 from the 3-point line as they rallied back from a 10-point deficit to take the lead in the fourth quarter, only to fall short as the Pacers escaped with the win on free throws.

Head to head, the Nets are 5-2 ATS in the last seven meetings in Detroit.

The Nets will again be without Kyrie Irving and Kevin Durant, while James Harden is currently listed as questionable, so the Nets could be seriously shorthanded once again. The Pistons’ struggles continued on Wednesday’s loss to the Pacers and they have injuries of their own as Dennis Smith Jr. is listed as questionable while Hamidou Diallo and Rodney McGruder are both out. This is a tough one to pick as we don’t know if Harden will suit up, but I’m all over the Nets if he is available in this one. 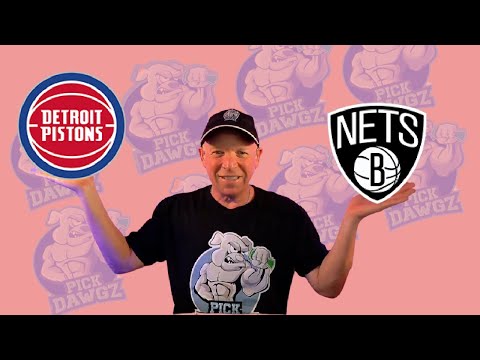