The Toronto Raptors and the Detroit Pistons duke it out at Little Caesars Arena on Wednesday night.

The Toronto Raptors have been in a real slump as they’ve lost seven of their past eight games and they will be hoping to stop a five-game skid after getting routed by the Bulls in a 118-95 road loss on Sunday. Norman Powell led the team with 32 points and five assists on 13 of 22 shooting, Kyle Lowry added 20 points with eight assists while Chris Boucher chipped in with 17 points off the bench. As a team, the Raptors shot 37 percent from the field and 12 of 45 from the 3-point line as they fell behind early after scoring just 22 points in the first quarter, before getting blown out in the fourth quarter where they were outscored by 33-22.

Meanwhile, the Detroit Pistons have been in terrible form as they’ve lost 10 of their past 12 games and they will be hoping to snap a four-game skid after falling to the Spurs in a 109-99 home loss on Monday. Josh Jackson led the team in scoring with 15 points off the bench, Jerami Grant scored just 14 points on four of nine shooting while Rodney McGruder chipped in with 13 points. As a team, the Pistons shot 47 percent from the field and seven of 25 from the 3-point line as they fell behind by 10 points at halftime, before getting blown out in the third quarter where they trailed by as many as 23 points.

Head to head, the Raptors are 11-5 ATS in the last 16 meetings in Detroit.

The Raptors are still dealing with so many players missing due to injuries and safety protocols and their confidence will be low after getting destroyed by the Bulls in their last outing, while the Pistons are coming into this one with no momentum as they’ve now lost four straight. This one is tough to pick, but even with all the players out, you still get the feeling that the Raptors will turn their season around sooner rather than later and I think that starts here. 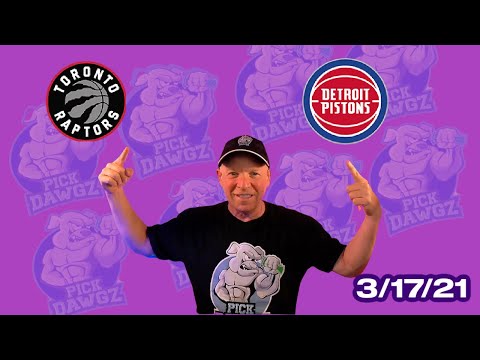