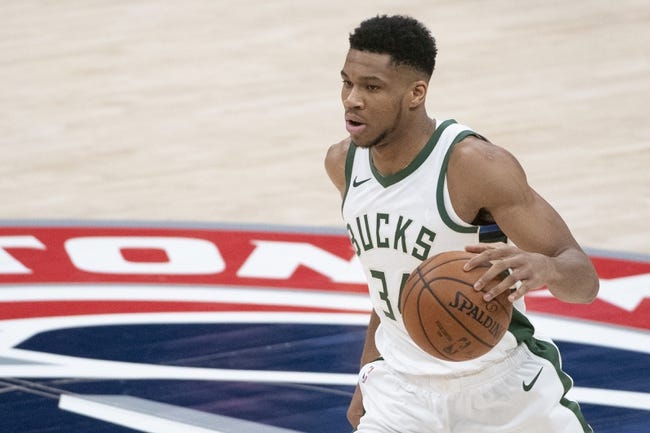 The Washington Wizards play host to the Milwaukee Bucks once again at the Capital One Arena on Monday night.

The Milwaukee Bucks have been in red-hot form as they’ve won eight of their past nine games and they will be looking to build on their current three-game win streak after sneaking past the Wizards in a 125-119 road win on Saturday. Giannis Antetokounmpo led the team with a triple-double of 33 points with 11 rebounds and 11 assists, Jrue Holiday added 18 points, Khris Middleton scored 16 points with eight assists while Bobby Portis chipped in with 14 points off the bench. As a team, the Bucks shot 43 percent from the field and 17 of 45 from the 3-point line as they found themselves in a real battle despite getting off to a quick start with 36 points in the first quarter, but they were able to rely on their defense in the fourth quarter where they held the shorthanded Wizards to just 24 points.

Meanwhile, the Washington Wizards have been in a real funk lately as they’ve lost five of their last six games overall and they will be hoping to end a three-game skid after Saturday’s narrow loss to the Bucks. Russell Westbrook led the team with a triple-double of 42 points with 10 rebounds and 12 assists, Rui Hachimura added 29 points with 11 rebounds while Alex Len chipped in with 10 points. As a team, the Wizards shot 45 percent from the field and 16 of 41 from the 3-point line as they squandered a 12-point lead in the second quarter, before fading out of the contest early in the fourth quarter where the Bucks used a 10-2 run to escape with the win.

Davis Bertans is listed as questionable for this one, so the Wizards could be shorthanded once again but they’ll be quietly confident here as they weren’t far from victory on Saturday. The Bucks haven’t been at their absolute best lately, but they’re continuing to pile on the wins. However, the Bucks are just 0-5 ATS in their last five road games and I think the Wizards can keep this one to single digits.