The Memphis Grizzlies and the Oklahoma City Thunder duke it out at the Chesapeake Energy Arena on Sunday afternoon.

The Memphis Grizzlies have been in decent form lately as they’ve won three of their last five games, but they will be looking to bounce back after falling painfully short to the Nuggets in a 103-102 home loss on Friday. Dillon Brooks led the team with 20 points on eight of 20 shooting, Brandon Clarke added 20 points and three blocks off the bench, Ja Morant scored 16 points with nine assists while Jonas Valanciunas chipped in with 14 points and 11 rebounds. As a team, the Grizzlies shot 46 percent from the field and 14 of 28 from the 3-point line as they rallied back from a 12-point deficit to take the lead late in the fourth quarter, only to lose by one as the referees seemed to miss a critical foul call in the final seconds.

Meanwhile, the Oklahoma City Thunder have been in decent shape as they’ve won four of their last seven games, but they are coming into this one looking for a better performance after getting routed by the Knicks in a 119-97 loss last night. Al Horford led the team in scoring with 16 points on seven of nine shooting, Luguentz Dort added 14 points with six rebounds and five assists, while Kenrich Williams chipped in with 13 points off the bench. As a team, the Thunder shot 48 percent from the field and eight of 32 from the 3-point line as they poured in 31 points in the first quarter to take an early 11-point lead, but it was all one-way traffic in favor of the Knicks from that point onwards as the Thunder didn’t have the firepower to keep up the pace.

The Thunder were without Darius Bazley and Shai Gilgeous-Alexander last night and that resulted in a massive loss to the Knicks, so it’s hard to imagine much of an improvement if those two players are out again. The Grizzlies were on a nice run before falling just short against the Nuggets in their last outing and they are 6-0 ATS in the last six meetings overall. I’m taking the Grizzlies to bounce back into form with a solid win here. 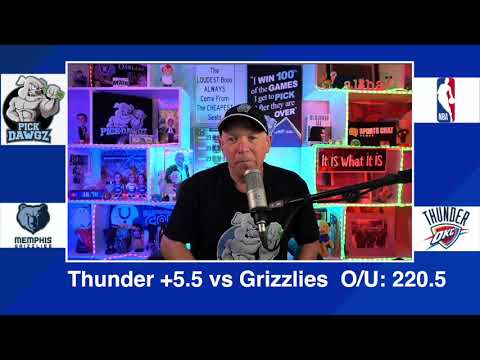