The Toronto Raptors invade the Spectrum Center to do battle with the Charlotte Hornets on Saturday night.

The Toronto Raptors have been in a real funk lately as they’ve lost five of their last six games and they will be hoping to put an end to a three-game skid after falling to the Hawks in a 121-120 home loss on Thursday. Norman Powell led the team with 33 points on 11 of 20 shooting, Chris Boucher added 29 points on 10 of 15 shooting off the bench while Kyle Lowry chipped in with 17 points and 12 assists. As a team, the Raptors shot 43 percent from the field and 17 of 37 from the 3-point line as they rallied back from a 19-point deficit to lead by as many as 15 points, before getting run down in the fourth quarter where the Hawks stole the game on a buzzer-beating game winner from Tony Snell.

Meanwhile, the Charlotte Hornets have been in decent form as they’ve won four of their last six games and they will be aiming for a third straight win after taking down the Pistons in a 105-102 home win on Thursday. PJ Washington led the team with 20 points, nine rebounds and two blocks, Gordon Hayward and Terry Rozier each scored 17 points while Cody Zeller chipped in with 15 points. As a team, the Hornets shot just 40 percent from the field and 10 of 30 from the 3-point line as they squandered a 16-point lead, before escaping with the narrow win behind Rozier who was big in the clutch.

The Raptors have really gone cold lately as they’ve lost five of their last six games and they will again be without key players in Pascal Siakam, OG Anunoby and Fred VanVleet who are all sitting out due to health and safety protocols. The Hornets are coming into this one with plenty of momentum as they’re aiming for a third straight win after sneaking past the Pistons on Thursday. You’d expect the Raptors to snap out of their funk sooner rather than later, but I don’t see that happening while they’re missing so many key players, so I’m sticking with the Hornets to stay hot with another win and cover at home. 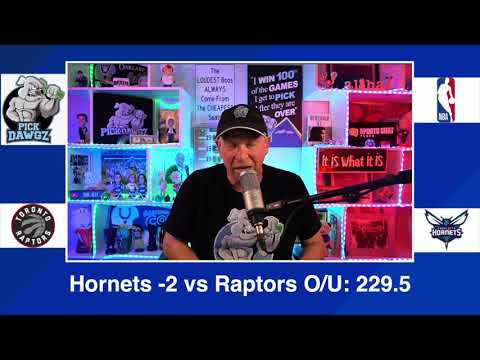