The Los Angeles Clippers pay a visit to the Washington Wizards at the Capital One Arena on Thursday night.

The Los Angeles Clippers have been in a bit of a rut lately as they’ve lost three of their past four games and they will be hoping to avoid a third straight defeat after getting stopped by the Celtics in a 117-112 road loss on Tuesday. Paul George led the team with 32 points on 12 of 26 shooting, Reggie Jackson added 25 points with seven assists on 10 of 14 shooting while Lou Williams chipped in with 12 points on four of 13 shooting. As a team, the Clippers shot 49 percent from the field and 18 of 38 from the 3-point line as they fought hard to cut an 11-point deficit to just two points in the fourth quarter, before the Celtics pulled away with a 9-0 run to escape with the game late.

Meanwhile, the Washington Wizards have been in great form as they’ve won seven of their past 10 games, but they will be hoping to stop a two-game skid after getting routed by the Grizzlies in a 125-111 home loss on Tuesday. Bradley Beal led the team with 23 points and five assists, Russell Westbrook racked up 23 points with 15 assists while Robin Lopez chipped in with 14 points off the bench. As a team, the Wizards shot 50 percent from the field and 11 of 31 from the 3-point line as they fell behind by 15 points going into halftime, before getting blown out in the third quarter where they fell behind by 23 points.

Kawhi Leonard sat out on Tuesday and is currently listed as questionable for Thursday while Marcus Morris is considered doubtful, so the Clippers could again be shorthanded in this one. The Wizards have been in fine form lately, but they’re coming off a bad loss to the young Grizzlies, so they will be keen to bounce back here. The Clippers will want to steady the ship after a couple of tough losses, but because they’re depleted right now, I’m going with the Wizards to pull off the upset at home. 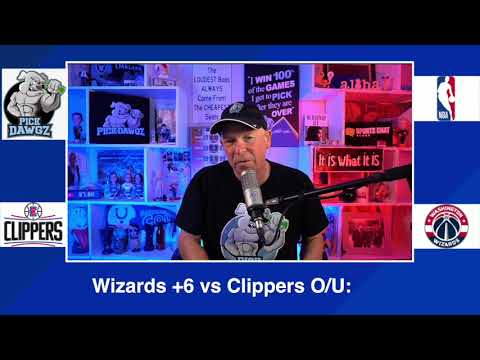