The Detroit Pistons and the New York Knicks duke it out at Madison Square Garden on Thursday night.

The Detroit Pistons have been in terrible form as they’ve lost six of their past eight games, but they will be looking to build some momentum after snapping a three-game skid with last night’s 129-105 road win over the shorthanded Raptors. Wayne Ellington drained eight 3-pointers to lead the team with 25 points, Saben Lee and Rodney McGruder each scored 20 points while Miles Plumlee and Dennis Smith Jr. each finished with triple-doubles. As a team, the Pistons shot 52 percent from the field and 20 of 41 from the 3-point line as they set the tone with 43 points in the first quarter, before pulling away in the third quarter where they held the depleted Raptors to just 20 points. Six players finished in double figures in scoring, while two players had triple-doubles.

Meanwhile, the New York Knicks have been in great form as they’ve won seven of their past 10 games, but they will be hoping to bounce back in this one after getting thrashed by the Spurs in a 119-93 road loss on Tuesday. Immanuel Quickley drained six 3-pointers to lead the team with 26 points off the bench, RJ Barrett added 15 points while Julius Randle tallied 14 points with 11 rebounds and five assists. As a team, the Knicks shot just 40 percent from the field and 15 of 36 from the 3-point line as they hung in the contest in the first half, before getting blown out in the second half where they were outscored by 68-46. Reggie Bullock finished with just three points while Alec Burks scored just four points on one of nine shooting.

Head to head, the under is 4-1 in the last five meetings overall and the Pistons are 9-23 ATS in the last 32 meetings in New York.

The Pistons are a struggling team that will take plenty of confidence from last night’s big win over the Raptors, but the Raptors were missing most of their key players, so it’s hard to get too excited. On the other hand, the Knicks were in terrific form before getting stopped in their tracks by the Spurs on Tuesday. I expect a lot of fight from the Pistons, but the Pistons are only 9-23 ATS in the last 32 meetings in New York and they are playing on zero days’ rest, so I’m taking the Knicks to bounce back with a win and cover here. 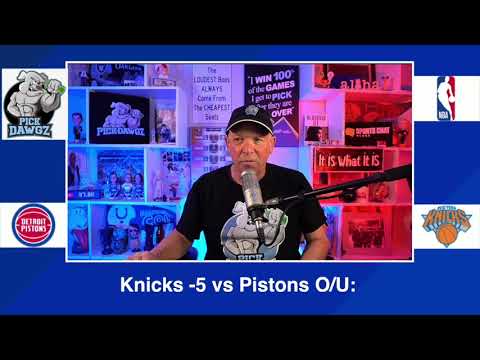