The Chicago Bulls pay a visit to the New Orleans Pelicans at the Smoothie King Center on Wednesday night.

The Chicago Bulls have been in decent shape as they’ve won five of their past eight games, but they will be hoping to avoid a third straight defeat after falling to the Nuggets in a 118-112 home loss on Monday. Zach LaVine led the team with 23 points, nine rebounds and five assists, Coby White added 20 points with 10 rebounds while Patrick Williams and Denzel Valentine each scored 13 points. As a team, the Bulls shot 44 percent from the field and 12 of 38 from the 3-point line as they rallied back from an early 15-point deficit to take the lead in the fourth quarter, only to go ice-cold when it mattered most as the Nuggets closed the game on a 12-4 run in the final 2:00 to steal the game late.

Meanwhile, the New Orleans Pelicans have been in decent form themselves as they’ve split their last eight games and they will be looking to build some momentum after upsetting the Jazz in a 129-124 home win on Monday. Zion Williamson led the team with 26 points, 10 rebounds and five assists, Brandon Ingram added 26 points, Lonzo Ball scored 23 points with eight assists while JJ Redick chipped in with 17 points off the bench. As a team, the Pelicans shot 56 percent from the field and seven of 11 from the 3-point line as they trailed at halftime after allowing 41 points in the second quarter, before flipping the game on its head in the third quarter where they outscored the Jazz by 40-24 to lead by 17 points.

Head to head, the over is 4-0 in the last four meetings overall and the Bulls are 10-2 ATS in the last 12 meetings in New Orleans.

The Bulls were quietly playing some of their best basketball the season before dropping their last two games, while the Pelicans will be full of confidence after taking down the surging Jazz in their last outing, so we’re in for a good one. It’s tempting to take the Pelicans at home, but I’m just not comfortable with that line, so I’m taking the Bulls who are 7-1 ATS in their last eight games as a road underdog. 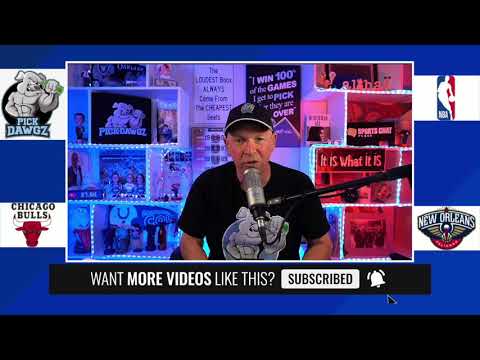