The Brooklyn Nets and the San Antonio Spurs duke it out at the AT&T Center on Monday night.

The Brooklyn Nets have been in great form as they were riding a season-high eight-game win streak before getting stopped in their tracks by the Mavericks in a 115-98 home loss on Saturday. James Harden led the team with 29 points, seven rebounds and six assists while Bruce Brown and Jeff Green each scored 12 points, but no other player finished in double figures in scoring. As a team, the Nets shot just 40 percent from the field and 14 of 44 from the 3-point line as they were right in the contest after scoring 38 points in the second quarter, before going ice-cold in the second half where they managed just 34 points. Kyrie Irving sat out the game due to a right shoulder injury and his status for Monday is unclear.

Meanwhile, the San Antonio Spurs have been in pretty good form lately as they’ve won six of their past eight games overall and they will be looking to build some momentum after outlasting the Pelicans in a 117-114 home win on Saturday. DeMar DeRozan led the team with 32 points and 11 assists, LaMarcus Aldridge added 21 points off the bench, Dejounte Murray scored 18 points with seven assists while Lonnie Walker chipped in with 17 points. As a team, the Spurs shot 47 percent from the field and 12 of 32 from the 3-point line as they escaped with the narrow win despite almost squandering a late 10-point lead in the fourth quarter.

Kevin Durant is still out while Jeff Green, Timothe Luwawu-Cabarrot and Tyler Johnson are all listed as questionable, but Kyrie Irving is expected to return to the lineup which is a real boost for the Nets. The Spurs are dealing with a long list of injuries of their own, but they’ve managed to stay in decent shape, so they’re in with a chance here at home. The Nets are 1-7 ATS in the last eight meetings in San Antonio and I think that trend continues as the Spurs come away with the big scalp. 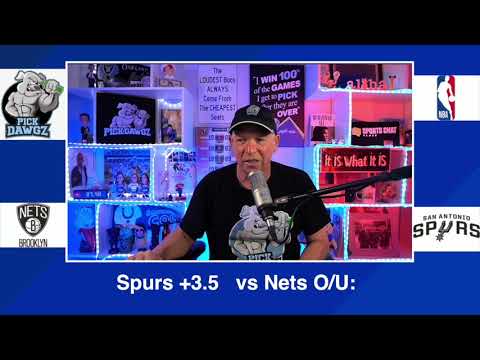