The Oklahoma City Thunder play host to the Denver Nuggets at the Chesapeake Energy Arena on Saturday night.

The Denver Nuggets have been in a bit of a funk lately as they’ve lost four of their last six games and they will be eager to bounce back here after falling just short to the Wizards in a heartbreaking 112-110 home loss on Thursday. Jamal Murray led the team with 34 points and six assists, Nikola Jokic added 24 points with 11 rebounds and seven assists while Michael Porter Jr. chipped in with 18 points and 10 rebounds. As a team, the Nuggets shot 43 percent from the field and 15 of 38 from the 3-point line scored just 11 points in the final 7:04 and missed out on an easy chance to force overtime as they blew a 4-on-1 fast break opportunity with the clock running down.

Meanwhile, the Oklahoma City Thunder have love seven of their past 10 games, but they will be looking to build some momentum after sneaking past the Spurs in a thrilling 102-99 home win on Wednesday. Shai Gilgeous-Alexander led the team with a career-high 42 points with eight rebounds and four assists on 13 of 20 shooting, Al Horford and Luguentz Dort each scored 16 points while no other player finished in double figures in scoring. As a team, the Thunder shot just 41 percent from the field and 18 of 44 from the 3-point line as they rallied back from an early 11-point deficit with 36 points in the third quarter, before escaping with the narrow win thanks to Dort who drained the game-winning 3-pointer at the buzzer.

The Nuggets haven’t been at their best lately and they will still be scratching their heads after the horrible finish in their loss to the Wizards on Thursday, while the Thunder will still be feeling good following their buzzer-beating win over the Spurs in their last outing. The Thunder are capable of pulling off the upset is Gilgeous-Alexander can get hot once again, but I think the safer play is on the Nuggets who are 12-2 ATS in the last 14 meetings overall. I think the Nuggets bounce back in fine fashion with a solid win here. 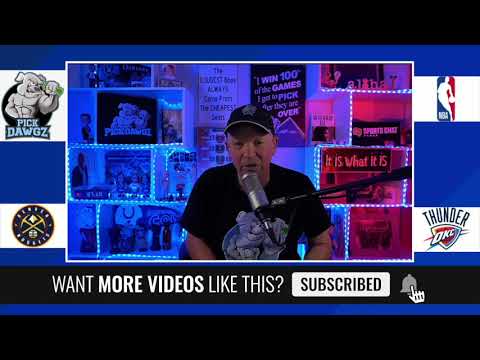