The Cleveland Cavaliers pay a visit to the Philadelphia 76ers at the Wells Fargo Center on Saturday night.

The Cleveland Cavaliers look to have moved on from their 10-game skid as they are now aiming for a third straight victory after blowing past the Rockets in a 112-96 home win on Wednesday. Jarrett Allen led the team with 26 points, 18 rebounds and four blocks, Collin Sexton added 23 points while Darius Garland chipped in with 11 points and 10 assists. As a team, the Cavaliers shot 50 percent from the field and 16 of 36 from the 3-point line as they looked to be in trouble after squandering an early 11-point lead, before taking over in the second half where they poured in 64 points to win easily in the end. Allen shot 10 of 11 from the field while Taurean Prince finished with just two points on one of eight shooting.

Meanwhile, the Philadelphia 76ers have been in decent shape lately as they’ve won four of their last five games and they will be aiming for a third straight victory after Thursday’s 111-97 home win over the Mavericks. Joel Embiid led the team with 23 points, nine rebounds and four assists, Ben Simmons and Seth Curry each scored 15 points while Dwight Howard chipped in with 14 points off the bench. As a team, the 76ers shot 43 percent from the field and 12 of 29 from the 3-point line as they took control with 36 points in the second quarter to take a double-digit lead at halftime, before running away with it in the fourth quarter where they led by as many as 26 points. Shake Milton shot just four of 13 from the field to finish with 10 points while Embiid shot just five of 20 from the field.

The Cavaliers have come to life over their past two games after struggling during their 10-game win streak while the 76ers have been in great form and will be looking to stay hot after routing the Mavericks in their last outing. The Cavaliers with the hefty start is tempting here, but they are only 3-13 ATS in their last 16 games overall, so I’m more comfortable taking the 76ers who are 7-2 ATS in their last nine home games. 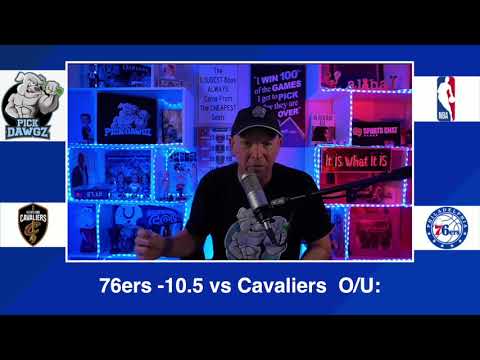