The Sacramento Kings pay a visit to the Detroit Pistons at Little Caesars Arena on Friday night.

The Sacramento Kings have been in a serious slump as they will be hoping to put an end to a nine-game skid after last night’s 140-121 road loss to the Knicks. De’Aaron Fox led the team with 29 points and 11 assists, Harrison Barnes added 22 points, Marvin Bagley scored 19 points while Tyrese Haliburton chipped in with 17 points off the bench. As a team, the Kings shot 49 percent from the field and 12 of 35 from the 3-point line but they got off to a rough start and were always fighting an uphill battle after allowing 77 points in the first half. Buddy Hield scored just nine points on three of nine shooting as his shooting struggles continued, but the bigger issue about the Kings has been their defense. Saddiq Bey sat out the game with an ankle sprain and is listed as questionable for Friday.

Meanwhile, the Detroit Pistons have been in a bit of a slump as they’ve lost four of their last five games and they will be hoping to bounce back after getting stopped by the Pelicans in a 128-118 road loss on Wednesday. Josh Jackson led the team with 25 points on 10 of 18 shooting off the bench, Mason Plumlee added 21 points with nine rebounds and seven assists while Saddiq Bey chipped in with 13 points. As a team, the Pistons shot 52 percent from the field and 13 of 37 from the 3-point line as they as they got off to a solid start with 69 points in the first half, but they couldn’t keep up the pace in the second half where they were outscored by 64-49 as they had no answer for the Pelicans’ Zion Williamson who scorched them for 32 points on 13 of 18 shooting.

The Kings are in a tailspin and they must be low on confidence after allowing 140 points in last night’s loss to the Knicks, but the reality is that they’re still favorites against the struggling Pistons who have lost four of their last five. The Kings are the deeper team with more talent, but they are just 2-5-1 ATS I their last eight games playing on zero days’ rest. With that being said, the Pistons who are 5-1 ATS in their last six home games and I think they can pull off the upset behind a big game from Grant. 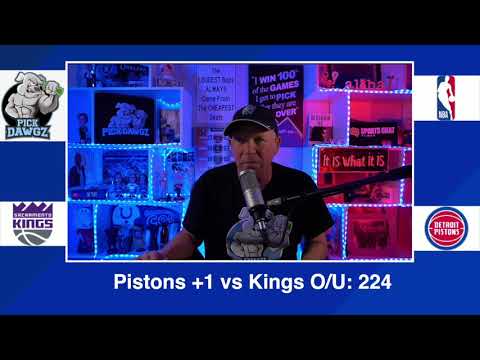