The Golden State Warriors have been in decent shape as they’ve won four of their past seven games, but they will be hoping to snap a two-game skid after falling just short against the Hornets in a heartbreaking 102-100 road loss on Saturday. Kelly Oubre Jr. led the team with 25 points on nine of 19 shooting, Andrew Wiggins added 19 points, Eric Paschall scored 16 points while Bob Wanamaker and Damion Lee each scored 14 points. As a team, the Warriors shot just 43 percent from the field and 13 of 39 from the 3-point line as they rallied back after a slow start, only to lose at the buzzer as the Hornets’ Terry Rozier drained the game-winner at the buzzer to finish with a game-high 36 points. Stephen Curry sat out the game due to an illness and is listed as questionable for Tuesday.

Meanwhile, the New York Knicks have been in pretty good form lately as they’ve won six of their past nine games and they will be looking to stay hot after sneaking past the Timberwolves in a 103-99 home win on Sunday. Julius Randle led the team with 25 points, 14 rebounds and four assists, RJ Barrett added 21 points on 10 of 20 shooting while Elfrid Payton chipped in with 11 points and seven assists. As a team, the Knicks shot just 42 percent from the field and six of 18 from the 3-point line as they got off to a quick start and dominated most of the game to lead by as many as 21 points, before escaping with the narrow win as the closed the final 32 seconds on a pivotal 6-1 run.

Head to head, the over is 5-1 in the last six meetings overall and the Warriors are 7-2 ATS in the last nine meetings in New York.

Stephen Curry is currently listed as questionable for this game with an illness, so the Warriors could be severely shorthanded once again, especially with James Wiseman and Kevon Looney already ruled out. I wouldn’t be shocked if the Warriors pulled off the win here as they didn’t look too bad without Curry on Sunday, but the Knicks have come to life lately and I think they’ll be good enough to take advantage here. 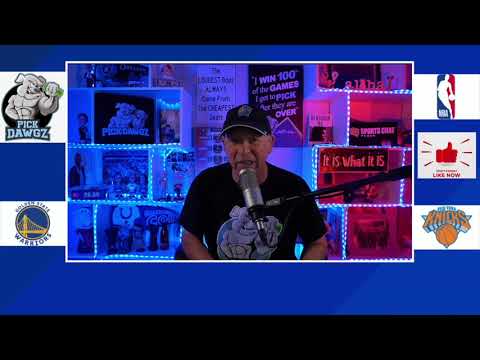