The Chicago Bulls pay a visit to the Houston Rockets collide at the Toyota Center on Monday night.

The Chicago Bulls have been in pretty good form lately as they’ve won four of their past six games and they will be looking to stay hot after taking down the Kings in a 122-114 home win on Saturday. Zach LaVine led the team with 38 points on 15 of 20 shooting, Coby White added 19 points, Thaddeus Young scored 18 points on eight of 12 shooting off the bench while Garrett Temple chipped in with 14 points. As a team, the Bulls shot a sizzling 59 percent from the field and 11 of 23 from the 3-point line as they took control with 40 points in the second quarter to lead by as many as 14 points, before holding on for the narrow win as the Kings cut the lead to just four points with 1:12 remaining.

Meanwhile, the Houston Rockets have been in a serious slump as they’ve lost eight of their last nine games and because their last two games were postponed, they haven’t played since their 118-113 loss to the 76ers back on Wednesday. John Wall led the team with 28 points and seven assists on 11 of 24 shooting, Jae’Sean Tate and DeMarcus Cousins each scored 19 points while Eric Gordon chipped in with 17 points and six assists. As a team, the Rockets shot 45 percent from the field and 15 of 47 from the 3-point line as they struggled to get going and quickly found themselves trailing by as many as 29 points, before pouring in 70 points in the second half to make it a close finish.

The Rockets have been really struggling lately, so they will be eager to get back in the win column, especially coming off an extended rest because of the postponed games, but they’ve caught the streaky Bulls at the wrong time as LaVine has been on a tear lately. The Rockets can surely snap out of their funk if they can put it all together here, but we haven’t seen that for a while now, so I’m sticking with the Bulls to stay hot with another win here. 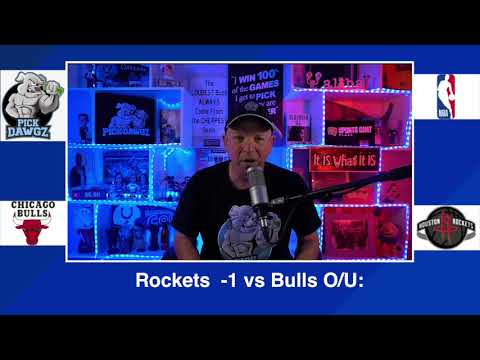