The Miami Heat and the Los Angeles Lakers duke it out at the Staples Center on Saturday night.

The Miami Heat have been in decent shape as they’ve won five of their past eight games and they will be hoping to build some momentum after snapping a three-game skid with a 118-110 road win over the Kings on Thursday. Tyler Herro led the team with 27 points on 12 of 17 shooting off the bench, Kelly Olynyk added 22 points on 10 of 16 shooting, Bam Adebayo scored a triple-double of 16 points with 12 rebounds and 10 assists, while Jimmy Butler score 13 points with 10 rebounds and 13 assists. As a team, the Heat shot 51 percent from the field and 12 of 34 from the 3-point line as they set the tone in the first half where they led by as many as 23 points, before holding in the second half where the Kings poured in 67 points.

Meanwhile, the Los Angeles Lakers have been in great form as they’ve won eight of their past 10 games, but they will be hoping to bounce back here after getting stopped in their tracks by the Nets by 109-98 on Thursday. LeBron James led the team with 32 points, eight rebounds and seven assists, Kyle Kuzma added 16 points with 10 rebounds while Montrezl Harrell chipped in with 10 points off the bench, but no other player finished in double figures in scoring. As a team, the Lakers shot 48 percent from the field and eight of 30 from the 3-point line which wasn’t nearly enough to keep up with the Nets who dominated most of the game to lead by as many as 25 points.

The Lakers really struggled without Schroder and Davis in their last outing, but neither player will be available on Saturday, so they’re going to have to figure it out quick. The Heat haven’t been at their best lately, but they’ve got enough healthy players to build some momentum, so a win over the Lakers would do nicely. The Heat are 4-1 ATS in the last five meetings overall and I think that trend continues as the Heat get a much-needed win here. 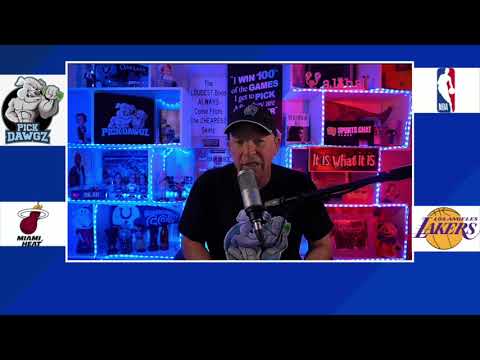