The Toronto Raptors and the Milwaukee Bucks do battle at the Fiserv Forum once again on Thursday night.

The Toronto Raptors have been in pretty good shape as they’ve won six of their past nine games and they will be looking to stay hot after Tuesday’s 124-113 road win over the Bucks. Fred VanVleet led the team with 33 points and seven assists, Pascal Siakam added 23 points, 13 rebounds and six assists while Kyle Lowry chipped in with 18 points and five assists while Chris Boucher scored a crucial 14 points with five blocks off the bench. As a team, the Raptors shot 50 percent from the field and 17 of 43 from the 3-point line as they took the narrow lead in the third quarter, before finishing strong in the fourth quarter where they held the Bucks to just 22 points.

Meanwhile, the Milwaukee Bucks have been in a bit of a slump lately as they will be hoping to put an end to a four-game skid after Tuesday’s home loss to the Raptors. Giannis Antetokounmpo led the team with 34 points, 10 rebounds, eight assists and five steals, Pat Connaughton added 20 points while Bobby Portis chipped in with 16 points. As a team, the Bucks shot 48 percent from the field and 14 of 37 from the 3-point line as they hung in the contest for most of the game, until the fourth quarter where they went cold as they weren’t getting much scoring outside of Antetokounmpo. Khris Middleton scored just 11 points while Brook Lopez scored just nine points.

Head to head, the under is 6-1 in the last seven meetings overall.

Kyle Lowry is currently listed as questionable for Thursday with an ankle sprain so the Raptors could be shorthanded here, but the same goes for the Bucks who are missing their starting point guard in Jrue Holiday. The Bucks have had a couple of nights to mull over their loss on Tuesday and I do think they get their revenge here, but this just seems like too many points for a struggling Bucks team. I think this one goes down to the wire, so I’m taking the Raptors with the points in this one. 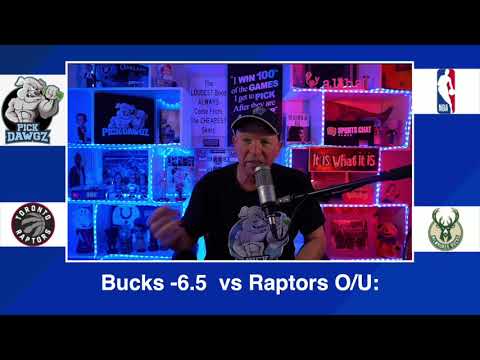