The New York Knicks invade the Amway Center to do battle with the Orlando Magic on Wednesday night.

The New York Knicks have been in pretty good form lately as they’ve won five of their last seven games and they will be aiming for a fourth straight victory after taking down the Hawks in a 123-112 home win on Monday. Julius Randle has been in great form as he led the team with 44 points, nine rebounds and five assists, RJ Barrett added 21 points while Immanuel Quickley chipped in with 16 points and five assists off the bench. As a team, the Knicks shot 50 percent from the field and 17 of 34 from the 3-point line as they set the tone with 39 points in the first quarter, before pulling away in the fourth quarter where they held the Hawks to just 22 points to win by double-digits.

Meanwhile, the Orlando Magic have been in a real slump as they’ve lost eight of their past 10 games and they will be hoping to bounce back after getting routed by the red-hot Suns in a 109-90 road loss on Sunday. Terrence Ross led the team with 23 points and five assists in a rare start, Desmond Bacon added 19 points while Nikola Vucevic and Michael Carter-Williams each scored 14 points. As a team, the Magic shot 37 percent from the field and six of 35 from the 3-point line as they fell behind by double-digits early after scoring just 16 points in the first quarter, trailing by as many as 27 points in one of their worst losses of the season.

The Knicks will be a little shorthanded for a while as they will be without the injured Mitchell Robinson, but they’ve quietly been playing some of their best basketball of the season and are running into the slumping Magic at just the right time. The Knicks are 4-0 ATS in their last four games overall and I think that trend continues here as the Knicks should be too good. 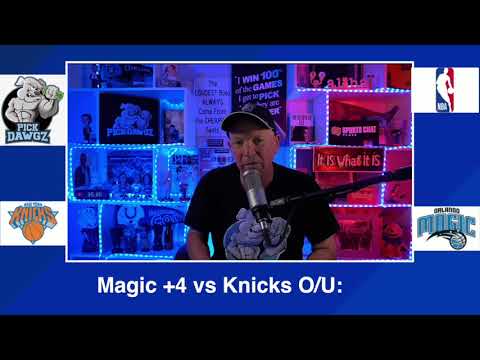