The Utah Jazz play host to the Philadelphia 76ers at the Vivint Arena on Monday night.

The Philadelphia 76ers have been in decent form lately as they’ve won six of their past nine games, but they will be hoping to avoid a third straight defeat after getting stopped by the Suns in a 120-111 road loss on Saturday. Joel Embiid led the team with 35 points on 12 of 23 shooting, Tobias Harris added 18 points with five assists on seven of nine shooting while Ben Simmons added 18 points on six of nine shooting. As a team, the 76ers shot 52 percent from the field and seven of 17 from the 3-point line, but they allowed the Suns to shoot over 60 percent from the field for the game which hurt them in the second half where Devin Booker and Chris Paul ran riot.

Meanwhile, the Utah Jazz have been the hottest team in the league as they’ve won 18 of their past 19 games and they will be gunning for an eighth straight win after blowing past the Heat in a 112-94 home win on Saturday. Donovan Mitchell led the team with 26 points on nine of 21 shooting, Bojan Bogdanovic added 19 points while Rudy Gobert chipped in with 16 points, 12 rebounds and three blocks on six of seven shooting. As a team, the Jazz shot 45 percent from the field and 12 of 46 from the 3-point line as they recovered from a slow start to take a five-point lead at halftime, before putting the game to bed early with a pivotal 16-0 run to open the third quarter.

Mike Conley sat out Saturday with right hamstring tightness and his status for Monday is unclear. The 76ers have been one of the more consistent teams in the league, but they’ve cooled off lately with a couple of losses in a row so they will be a little low on confidence coming into this one. The Jazz have been absolutely on a tear lately and they’ve been money at home as they are 11-1 ATS in their last 12 home games. I wouldn’t be shocked if the 76ers pulled off the upset here, but it’s just too hard to back against the Jazz while they’re in this kind of form.  Give me the Jazz to get the win and cover at home where they are 12-2 so far this season. 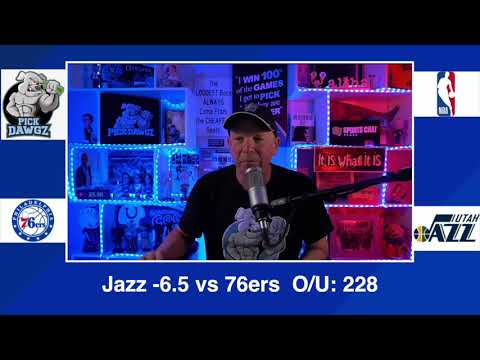