The Washington Wizards play host to the Houston Rockets at the Capital One Arena on Monday night.

The Houston Rockets have been in a real slump lately as they’ve lost six of their past seven games and they will be hoping to snap a five-game skid after getting routed by the Knicks in a 121-99 road loss on Saturday. John Wall led the team wit 26 points on nine of 20 shooting, Eric Gordon added 24 points with six assists while DeMarcus Cousins chipped in with 10 points, 10 rebounds and two assists. As a team, the Rockets shot just 37 percent from the field and eight of 43 from the 3-point line as they started to fight back from a 16-point halftime deficit, before getting blown out in the fourth quarter where the Knicks poured in 34 points.

Meanwhile, the Washington Wizards have been struggling lately as they’ve lost nine of their past 13 games, but they will be looking to build some momentum after last night’s 104-91 upset win over the Celtics. Bradley Beal led the team with 35 points and five assists on 10 of 18 shooting, Rui Hachimura added 15 points on five of nine shooting while Russell Westbrook chipped in with 13 points, nine rebounds and 11 assists. As a team, the Wizards shot just 39 percent from the field and seven of 30 from the 3-point line, but they had one of their best defensive showings of the season, holding the Celtics to just 35 percent shooting from the field. The Wizards dominated this one and led by as many as 25 points, before resting their starters in the fourth quarter.

Victor Oladipo has been ruled out due to a sore right foot, while Russell Westbrook’s status is currently questionable. The Rockets have shown glimpses of their potential this season, but they’ve been struggling so much lately that they’ve actually opened as underdogs against the Wizards. It’s always tough to bet a team playing on zero days’ rest, but the Wizards did look impressive in last night’s win over the Celtics and I think they can back that up with another strong performance here. 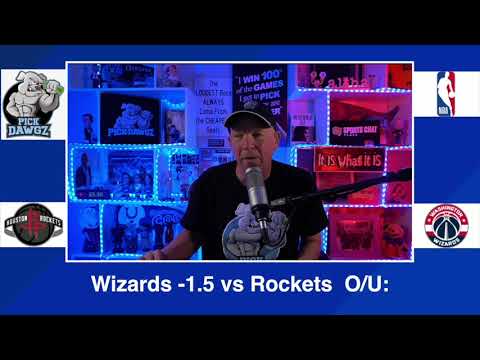