The New York Knicks invade the Capital One Arena to do battle with the Washington Wizards on Friday night.

The New York Knicks have been in a slump as they've lost seven of their past 10 games and they will be hoping to avoid a third straight defeat after Tuesday's 98-96 road loss to the Heat. Elfrid Payton led the team with 18 points, Derrick Rose added 14 points off the bench while RJ Barrett chipped in with 13 points. As a team, the Knicks shot just 42 percent from the field and 10 of 28 from the 3-point line as they looked to be in full control after leading by as many as 12 points, before going ice-cold in the fourth quarter where they managed just 14 points in a nightmare finish.

Meanwhile, the Washington Wizards have lost eight of their last 11 games and they will be hoping to bounce back after getting routed by the Raptors in a 137-115 home loss on Wednesday. Bradley Beal led the team with 24 points and five assists, Russell Westbrook added 23 points with seven assists while Rui Hachimura chipped in with 15 points. As a team, the Wizards shot 45 percent from the field and 12 of 41 from the 3-point line as they allowed 40 points in the first quarter to fall behind by double-digits early, before getting blown out in the fourth quarter as the Raptors' second unit finished in a flurry.

The Knicks haven't been playing anywhere near their best lately, but they almost took down the Heat in their last outing, while the Wizards have struggled all season and they will be further shorthanded as Beal is being rested for this one. This is a game I'd rather stay away from, but if I had to choose, I'm taking the Knicks to get the win and cover in this one. 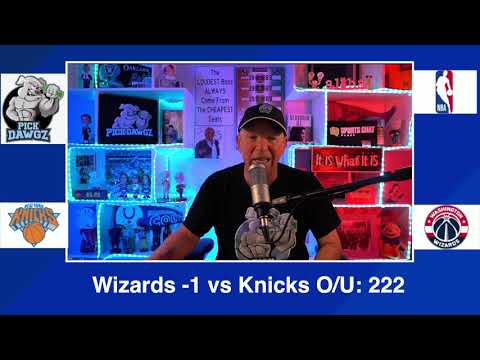